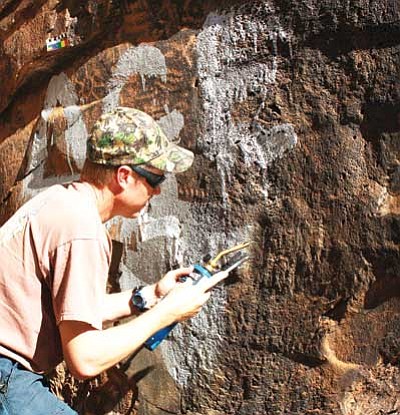 WILLIAMS - A petroglyph panel at Keyhole Sink on the Williams Ranger District that was vandalized in August has received restoration and repair work.

Rock art specialist Johannes Loubser and Kaibab National Forest archaeologist Neil Weintraub spent a few days early last month working to remove graffiti that had been painted onto the petroglyphs, which date from between AD 700 and AD 1100.

"We were concerned that with every passing day, the paint might adhere deeper into the petroglyphs," Weintraub said. "And, with winter coming, we knew we had a limited timeframe to complete the restoration work. When we found out that Jannie [Johannes Loubser] was going to be in the area working to remove graffiti at a site in Glen Canyon National Recreation Area, we knew we had to pursue the opportunity to have him help at Keyhole Sink."

On the morning of Nov. 4, Loubser and Weintraub began efforts to remove the silvery white paint scrawled across the large petroglyph panel. Kaibab National Forest employees PT Carter and Tyler Knight joined them in their efforts. Several materials and techniques were tested until they settled on a course of action that worked best.

"Most visitors to Keyhole Sink will not be able to tell that vandalism took place here," Weintraub said after the restoration work was completed. "However, even though we were largely able to repair the damage, this site will never be the same."

Where the large scribbled words "ACE" and "TJ" once appeared, now - thanks to the restoration effort - only a light sheen remains.

"For thousands of years and for thousands of visitors - both recent and prehistoric -Keyhole Sink was a serene place to make a connection with nature and with the past," Weintraub said. "I feel that all changed in late August when someone decided to hike in three-quarters of a mile to the petroglyph panel with a bucket of paint."

Loubser, who has a PhD in Ethno-Archaeology and a post-graduate diploma in Rock Art Conservation and Management, recommended that Kaibab archaeologists periodically rub local soils and water on the panel to help cover the light sheen. He also said he believed that, over time, weathering should help break down the light coat of paint that remains.

"Despite our proactive efforts over the years to protect Keyhole Sink and to educate the public about the value of sites like this, it only takes one vandal to show the vulnerability of cultural resources," Weintraub said. "We will continue our charge of trying to instill respect for our historic and prehistoric resources in the hopes that other sites will be protected."