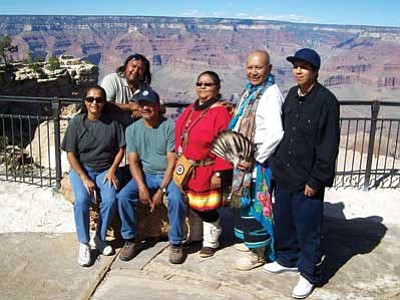 The fourth annual Intertribal Meeting brought together representatives from federal land management agencies and tribes to share information and discuss topics of interest to all including traditional perspectives on federal land use, forest restoration efforts, recent wildfires and rehabilitation work, and traditional ecological knowledge.

The meeting, which was held in mid-September, was hosted by Kaibab National Forest, Coconino National Forest, and Grand Canyon National Park and included field visits to locations and projects on each hosting unit.

"A lot of times you go to these kinds of things and you stay in a meeting room," said Lee Lomayestewa, a staff member of the Hopi Cultural Preservation Office and an attendee at the Intertribal Meeting. "I really liked going out to visit sites and actually seeing some of the projects being done on the ground."

Field visits included a tour of the Forest Service/Grand Canyon office in Cameron, that focused on outreach to the Western Navajo Nation; a visit to the area burned by the Schultz Fire in Flagstaff to see the effects of the fire and the rehabilitation work occurring; a stop at Red Butte on the Tusayan Ranger District to discuss the Northern Arizona Proposed Withdrawal Environmental Impact Statement that relates to proposed exploration for uranium; and a tour of the Mather Point area on Grand Canyon National Park.

"Visiting the landmark feature in the newly designed Mather area was a wonderful opportunity for tribal representatives to see it completed and in place," said Janet Cohen, tribal program manager for Grand Canyon National Park. "Tribes were integral in its development and it highlights the important connection tribes maintain with the Grand Canyon."

A focal area for the meeting was a discussion about traditional uses of federal lands and ways to accommodate them. These uses could range from conducting ceremonies in areas of special tribal significance to collecting traditional plants.

"We visited numerous places and, along the way, discussed a wide range of issues related to management of lands in northern Arizona," said Mike Lyndon, tribal liaison for the Kaibab National Forest and a key organizer of the Intertribal Meeting. "We felt it was a very valuable two days and we hope all the participants did too."

Other topics included the Tribal Forest Protection Act of 2004, which authorizes the Secretaries of Agriculture and Interior to give special consideration to tribally-proposed projects on agency lands bordering or adjacent to Indian trust land, and the Four Forests Restoration Initiative, which seeks to restore fire-adapted ecosystems across northern Arizona.

"Everybody benefits from all of the things that the Park Service and Forest Service are trying to preserve for the future - not just for us [tribes] but for everyone," Lomayestewa said. "It is good to be working together."