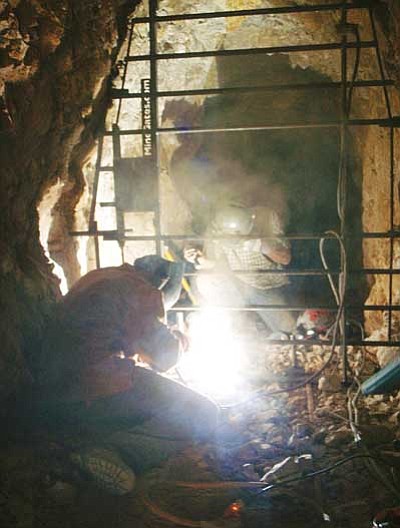 Photo/NPS <BR> Installation of bat gates on Horseshoe Mesa in 2009.

GRAND CANYON, Ariz. - Beginning early this month, the National Park Service will conduct several projects at abandoned mines throughout Grand Canyon National Park to make them safer for park visitors. Active mining occurred in Grand Canyon in the late 1800s and early 1900s, and the legacy of past mining activity remains. Funding from the American Recovery and Reinvestment Act of 2009 (ARRA) is being used to secure numerous mine openings at the defunct mines, installing bat gates and posting warning signs where appropriate. Work is scheduled to continue through the end of November and will secure a total of eight mine features at five separate locations.

Bat-accessible gates will be installed at four mine sites. Bat gates preserve critical habitat for bats in old mine sites while preventing people from entering hazardous areas. At the Grandview Mine, where bat gates were installed in the main mining area in 2009, two shallow adits and a prospecting pit will be permanently backfilled.

Physical Science Program Manager Deanna Greco said, "The eight mine features scheduled for closure all present significant hazards to visitors and this project is enabling the park to address this critical safety issue. For example, the Tanner-McCormick Mine along the Beamer Trail has pockets of poor air quality with low oxygen levels."

Grand Canyon National Park Superintendent Steve Martin adds, "Work on this project would not have been possible without funding from the American Recovery and Reinvestment Act. This project makes old mining sites safer for human visitation, while also providing habitat for sensitive species of wildlife and preserving cultural resources."

An Environmental Assessment (EA) was prepared under the National Environmental Policy Act for closures of Abandoned Mine Lands at Coronado National Memorial, Organ Pipe Cactus National Monument, Saguaro National Park, and Grand Canyon National Park. The EA identified the hazards associated with these abandoned mines and proper closure methods that reduce the hazard while being sensitive to wildlife and cultural resources.