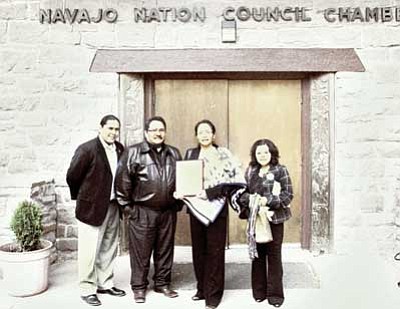 Speaker Morgan and the 21st Navajo Nation Council are grateful for the relationship that has been built with the Havasupai Tribe. The Havasupai's involvement in helping form a united tribal front, along with the Navajo Nation, protects the sanctity of the San Francisco Peaks, Dook'o'oslííd, which ultimately made a significant difference in the Flagstaff City Council's decision to disapprove the substitute water sale agreement to make artificial snow at the Arizona Snowbowl.

"As you know, our Navajo Nation Council expresses great opposition to the efforts of those who seek to desecrate Dook'o'oslííd," said Speaker Morgan. "We recognize the health and welfare of our communities is in part contingent on the well being of our sacred mountains. We are proud to work alongside the Havasupai and others who share common positions. Further, we hope the Navajo Nation, Havasupai Tribe, and others can carry on this collaborative effort into the future."

Eric Descheenie, legislative staff assistant in the Office of the Speaker, also assisted tremendously by assisting with the Navajo Nation's opposition of artificial snowmaking on Dook'o'slííd.

"I am proud of our Navajo Nation delegation to the protection of Dook'o'oslííd in particular the work of Council Delegate Thomas Walker, Jr.," added Deescheenie. "His tact and diplomacy is both unique and critical to the on-going efforts to protect Dook'o'oslííd, and that of our Navajo culture and language."