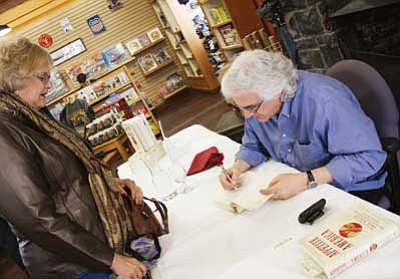 <br>Patrick Whitehurst/WGCN<br> Author Stephen Fried signs copies of his new book ‘Appetite for America’ while visiting Williams and the Grand Canyon for a recent book tour in northern Arizona.

WILLIAMS, Ariz. - The Fred Harvey story has always been a fascinating one in the southwest and particularly at Grand Canyon, an area where Fred Harvey's name was a common one. But his story, according to author Stephen Fried, has never been completely told. In his newest book, "Appetite for America: How Visionary Businessman Fred Harvey Built a Railroad Hospitality Empire That Civilized the Wild West," Fried explores the man behind the myth of Fred Harvey.

Fried said the Fred Harvey story has been told in small portions in lot of different places over the last 100 years, but never has it been collected in a singular tome.

"Appetite for America is the first full-length biography of Fred Harvey, of his sort of revolutionary family business and how it changed America, along with their partners in the Santa Fe Railroad," Fried said, calling the Harvey story a "great American saga."

In his book, Fried brings Harvey from the world of myth and paints a real-life, human portrait of the famed entrepreneur.

"He was much more interesting as a real person than he was as a mythic character," Fried said. "A lot of people don't understand that many of the things done in the name of Fred Harvey, they assume Fred Harvey himself, the man, did, were actually done long after he died by his son Ford, who ran the company much longer than Fred did - was Fred longer than Fred was."

Fried lives in Philadelphia, where he teaches magazine writing at Colombia University in New York. He writes books and articles for a number of national magazines. He said he has always been fascinated with the Fred Harvey story, particularly since he visited the Grand Canyon area in the early 1990s.

Fried said the idea behind the Harvey Company was to make it a brand, or an idea, to make Fred Harvey into something of a mythical character for travelers who visited his businesses.

"Most of the things that people focused on in Fred Harvey land (in northern Arizona) really became a big deal after the Grand Canyon opened, after the train line was built to the Grand Canyon in 1901, and after the El Tovar opened in 1905, that's when tourists really started coming to northern Arizona, but Fred Harvey was dead by then," Fried said. "Fred Harvey died in 1901, before the train line to Grand Canyon was finished, and he was in ill health for many years toward the end. When people say that Fred Harvey did this or Fred Harvey did that in Arizona, they usually think they are referring to Fred Harvey the man and what they are really referring to is Fred Harvey the company. They called the company Fred Harvey, not the Fred Harvey Company exactly for that reason, so that people would think that Fred Harvey was still alive and that they were actually being taken care of by Fred. That was Fred's idea. It was actually quite a brilliant way to run his business. For many, many years, people thought that Fred Harvey was still alive and still taking care of them, which is what Fred and his son Ford actually wanted. The company was actually a very smart, very modern thinking company. It really changed a lot of things in the way people are taken care of in America across the country."

The company, he said, introduced travelers to a different way of seeing their own country, particularly when it came to seeing Grand Canyon.

"That experience, while it's pretty easy today because you can drive there, was manufactured and allowed to happen by private companies at the turn of the last century, by the Atchison Topeka and Santa Fe Railroad, which built a private rail line to the Canyon, and the Fred Harvey Company, which ran a big luxury hotel and later other hotels, at the lip of the Canyon," Fried said.

The Harvey Company was a multi-generational family business that, by the time the name was widely associated with the Grand Canyon in the early 1900s, already operated in approximately 80 cities across the United States.

"The idea was to just offer perfect service to people and for them not to think much more about it except for Fred Harvey meant excellent food, perfect service, being able to get off the crummiest train ride that you possibly had and walking into luxury and all the comforts of home. That's all they wanted people to think," Fried said. "In order to have that very simple thing happen, they had to create a very complicated business full of incredibly devoted and loyal employees over many generations to keep that going. You do that while America is sort of coming to grips with itself. This is the post-Civil War era, it's a time when the west allowed people to think of America a different way, because the original America of the east had been in a civil war from which it was still recovering."

Since it's release a couple of months ago, sales on the book have been going well, Fried said.

"It's been doing great," he said. "The book came right out of the box. It's been getting wonderful reviews in many big national places: New York Times, Wall Street Journal, it was on NPR (National Public Radio) on All Things Considered, we had wonderful press attention in the southwest. It's been out almost two months and we're very happy with how it's been doing."

Fried recently traveled through the area on a train tour throughout the southwest and other areas to promote the new book. He'll return to the Grand Canyon Aug. 26-28 for a book signing. Plans are also under way for Fried to visit Flagstaff and Winslow as well.

"I think that when people go to the Grand Canyon they visually understand America in a different way," Fried said. "When you hear the story of how the Grand Canyon and all the places in the west became places that people visited and you cross-reference it with the story of America in the post-Civil War era, which is really what I decided to do with my book, you see the growth of America in a new way. You understand how America really became the United States, because obviously after the Civil War, it couldn't be anything further from the United States, but in a very short period of time, in part because of its relationship to the west, a lot of which was driven by the railroad, especially the Santa Fe, and by Fred Harvey, people came to have a different understanding of America and that idea that visiting the west instead of leaving the country for travel - that became a patriotic notion, is also part of the story. It's a fascinating story that, to me, just brought together a lot of different things about America that I had learned in very boring history classes, but wanted to figure out how to make really interesting for me. I wanted to write a history book that I would read, as somebody that works in magazines and is used to writing that is a little more driven by great characters and great drama and great narrative, as well as the painstaking historical research, which believe me, I did."

"Appetite for America" is available at a number of bookstores in northern Arizona, as well as online retailers. The book was published in March.