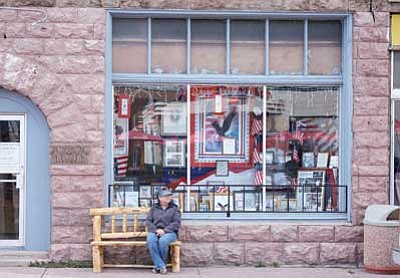 Ryan Williams/WGCN<br> A visitor to downtown Williams sits outside of the Inspirations Windows of Williams project on the corner of Route 66 and Third Street.

WILLIAMS - Inspirations, Inc., a local youth organization, became the topic of conversation for members of Williams City Council May 13, following an April 22 meeting in which the local group was awarded $49,616 in Community Development Block Grant (CDBG) funds for facility improvements on the Masonic building located at the corner of Route 66 and Third Street.

According to city officials, the approved amount was actually earmarked for a second Inspirations project, one that council members did not approve during the April 22 regular meeting. Inspirations had applied for CDBG funds for both projects. The amounts for the two projects, however, were reversed, according to interim City Manager Joe Duffy.

Duffy asked that council members clarify their April 22 decision during the recent meeting.

"This is just to clarify and fix a mistake that was made during the last presentation," Duffy said. "The Inspirations facility improvements was $15,000."

Vice Mayor Don Dent said that, despite the error, he believed the Inspirations facility improvements project would be able to utilize the already approved $49,616, particularly when it came to costs associated with ADA improvements and other areas.

"I think they could probably use pretty close to the whole $50,000 on the building improvements," Dent said.

Sue Tamulevich, with Inspirations, Inc., said costs for the building improvements would exceed $50,000 and that she would still seek additional funds on the project. She said the organization hopes to use the building for youth job training and the group's Windows of Williams project.

"I have quite a few people that were willing to volunteer, because this is very exciting for this town to have this happen," Tamulevich said.

Council members ultimately asked that the matter be tabled for further review. They approved the $49,616 during a special work session last week.

City officials awarded $339,415 in CDBG grant funds during the late April meeting. The Senior Center in Williams was awarded $50,000 toward facility improvements, Inspirations was awarded roughly $49,000, with the remaining funds going toward street improvements in certain areas of the city. Eight local projects applied for CDBG funding with the city. City officials are allocated federal CDBG funds every four years.