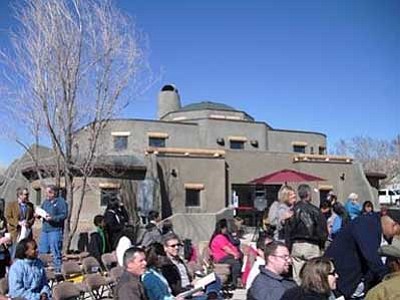 "We now have our own cultural center and can do activities related to our traditions. It reinforces being productive, teaching language, cultural arts and having facilities for children to learn traditional practices," said Loretta Jackson-Kelly, director of the Hualapai Department of Culture. "We want to carry on this momentum of instilling in our children their cultural identity. We want to see a museum and library so everyone can benefit from preservation of past cultures and the historical significance of the Hualapai Tribe. We still survive. Our aspirations for the future include taking the past (and) filtering it through today. That enables us to work on where we want to be in the future."

In another effort to preserve their culture the Hualapai people collaborated with author Jeffrey Shepherd to assemble the Tribe's first public history published in thirty years. The book is titled "We are an Indian Nation" and was more than 10 years in the making.

"Somewhere between my own archival research, interviews with and input from Hualapais, and numerous outside reviewers, the narrative that has emerged is both mine and theirs. Although no single book could come close to representing the full history and the achievements of this community, I hope that 'We are an Indian Nation' provides at least a glimpse into the voices and agency of the Hualapai people," said Jeffrey P. Shepherd, author.

Over a century of social and economic hardship has threatened the culture and traditions of the Hualapai people. Through tourism, the tribe's primary source of generating revenue and jobs, the tribe has made improvements to the quality of life on the reservation that will help ensure a better life for future generations. Services such as a "Boys and Girls Club" and a "Head Start" facility have already been built and several other social services buildings are planned.