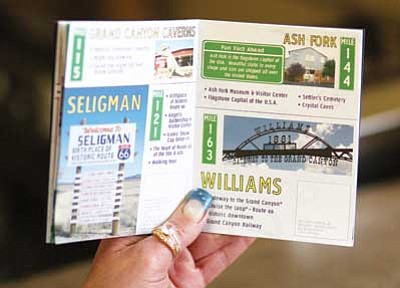 Ryan Williams/WGCN<br> Main Street’s Route 66 passport, which features Williams and other Mother Road towns, will be available at the Williams-Forest Service Visitor Center starting May 27.

WILLIAMS - Arizona's historic Route 66 has always been an attraction for travelers across the globe. Many of those travelers need a passport to come to the United States in order to travel the famed Mother Road. Those same travelers, as well as Route 66 fans closer to home, will now get a chance to own an altogether different kind of little blue book.

A Route 66 passport will be available next week for fans of the historic landmark. The passport, made possible by the Main Street organization, will be available in Williams beginning next week. Route 66 communities from throughout the state are featured in the special promotional tool, said Kim Kadletz of the Williams Main Street Association. Kadletz presented the collectible passport to members of the Williams City Council May 13. Kadletz is on the board of directors for the Williams Main Street Association. He also serves as treasurer for the organization.

"One of the functions for Main Street is business enhancement," Kadletz told council members. "About a year ago one of the members of the Main Street board attended the All Community Conference in Flagstaff and came up with an idea to enhance the businesses, not only in Williams, but throughout northern Arizona."

Work on the Route 66 Passport has been in progress for about a year, Kadletz said.

"The passports will be at each visitor center, including our own," he said. "Customers can pick this up for free. Some of the cities have stamps, as does ours and (travelers) qualify for some type of prize. The whole basis is for them to come to our town and do more shopping."

Besides having their passports stamped in various Route 66 communities, coupons may also be added to the passports, which can be slipped inside the pages to help draw visitors to particular area businesses.

"I think it would be a good idea with our fundraising efforts this year," Kadletz said. "I'm going to recommend we give the merchants an option to put the coupons in for free as part of their membership. For example, if they get seven stamps, they get a certificate, eight stamps they get a goody bag, 10 stamps statewide they will qualify for a grand prize, which may be a big screen TV or something to that effect."

Passports will be available beginning May 27, Kadletz said.

"They passed out 150 of them as samples at the Fun Run in Kingman a week or so ago," he said. "I think it's going to work and we're on the way to helping business as part of our function."