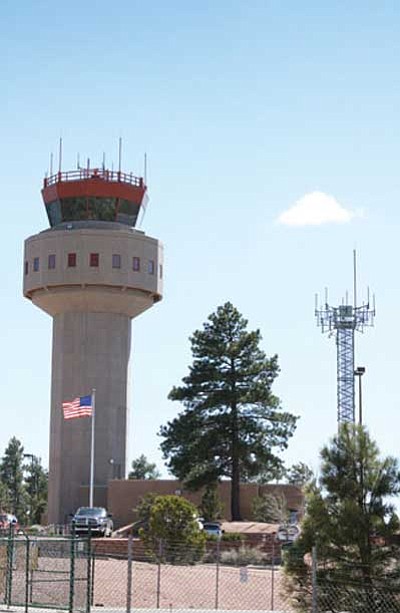 Patrick Whitehurst/WGCN<br> A mock disaster drill is scheduled for May 19 at the Grand Canyon Airport.

GRAND CANYON, Ariz. - Emergency response teams from a number of Grand Canyon area organizations will take part in a mock disaster drill May 19 at the Grand Canyon Airport. Specifics on the drill are not being released, as organizers are hoping to measure response times and the effectiveness of various organizations in the event of a major disaster. According to co-organizer Jake Banks, the drill will involve the Grand Canyon Airport Fire Department, Tusayan Fire Department, the National Park Service, DPS, Guardian, the Coconino County Sheriff's Department and other emergency response organizations.

"We put on this drill and we see how we work together," Banks said. "We do an AAR after, which is an After Action Review. That's where we come up with what we can do to make ourselves better. It's a big scenario. Everybody has role playing and acting. We do transport and triage. Triage is a French word for sort. It's a way that we sort the patients by priority."

He said the crash alarm and notifications may begin around 9 a.m. Volunteers for the event are still needed, Banks added.

"We took a bunch of flyers and brochures to all the different hotels and businesses and basically got no feedback," Banks said. "We need at least 30 people to volunteer to be patients."

Anyone interested in volunteering for the drill can contact Banks or co-organizer Tim Leija at the Grand Canyon National Park Airport at (928) 638-2448.

"We have to do it for FAA regulations. We have to do it every three years," Leija said. "It gets the Grand Canyon Fire Department, the airport, ready to go in case we have something. The main reason me and Jake are doing it this time is to see how the community will respond to it. The CERT team, Tusayan Fire, the National Park Service, to see what exactly they can do, the times they're going to be responding."

A disaster, he said, doesn't necessarily have to be an airline incident, but could happen on the ground as well.

"It could be a bus, it could a business that collapses or something like that," Leija said. "This just kind of gets everybody together. We're just mixing it up with our tri-annual drill that we have to do here at the airport."

He said local agencies learned a lot from a prior mock disaster drill held three years ago.

"We had a lot of people staged that were available within minutes. With this one we're going to be more realistic. We're looking for the timed responses from people coming from different areas."

The fire department, he said, will also be timed.

"When we have incidents at the airport, our time is usually a minute and 40 seconds. That's our average time on the airport property in the runway area," Leija said.