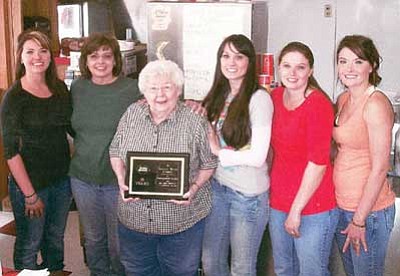 Byars bought an existing Dairy Queen franchise at the east end of Williams in 1960. When the property changed hands in 1972, Byars was forced to find a new location. She moved to her current location at Route 66 and South Sixth Street and has been there ever since.

"I got this place where I'm at now and it's a lot better because you get the Safeway traffic," Byars said. "You get them going in and then coming out."

Byars said the business has always been family owned and operated.

"My daughter Debbie, she's been running it now since I was 62 and her family all works down there," Byars said. "Pretty quick we'll have another generation coming up."

Although not actively managing the Dairy Queen, Byars does make a point of stopping by the DQ.

"I go down and talk to the kids and eat once in awhile," Byars said. "I think my daughter Debbie does a better job than I did."

It's no wonder. Byars said her daughter spent quite a bit of time at the Dairy Queen when she was growing up.

"She was practically born down there," Byars said,

Byars said business is still going strong after all this time. Years ago, she said she was able to run the restaurant with just two people.

"Now, you've got to have four or five people on a shift," she said. "There are a lot more tourists moving around. I used to have to go down there and clean it all up and do it all. Oh yeah. Holidays and all. My family would come in and say 'We're having a big family picnic. Come down.' But, you can't miss the Fourth of July. You had to be there."