Property owners to see tax hike in November
Increase could collect up to $5.1 million annually 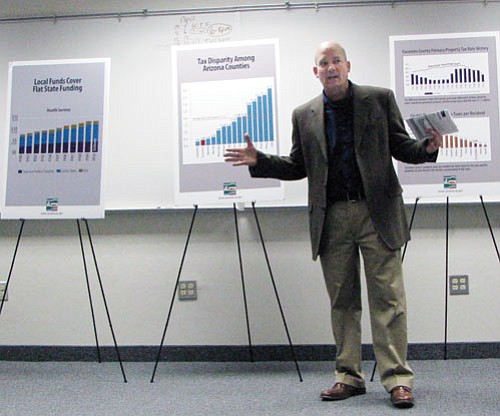 WILLIAMS - Property owners in Coconino County will experience an increase in taxes as the result of a new tax approved Dec. 15 by the Coconino County Board of Supervisors. Collection of the property tax that will fund a Public Health Services District begins in November. County officials were in Williams to discuss the increase April 29 at Coconino Community College.

"It's always difficult to deliver the message of how we're doing and why we are doing what we are doing," said District 3 Supervisor Matt Ryan. "During an economic downturn there is always an increase in requests for assistance."

The county's budget process begins this month. The actual tax rate likely would be set in June as part of the budget process. The maximum would be 25 cents per $100 of assessed value in addition to the basic county tax rate of $1.35. When combined with all other property taxes, the increase amounts to 3-5 percent of a total property tax bill. The new property tax will increase taxes for a $300,000 home by approximately $80 per year.

The board of supervisors had been considering the creation of a Public Health Services District since 2007. The board voted to create the district in December while facing additional cuts in funding from the state of Arizona. Due to state cuts, the county's budget fell $3 million short. In 2011, county officials are anticipating an $8 million deficit.

Deputy County Manager Mike Townsend said county officials have used a three-prong approach to lessen the effects of the recession, which they recognized in 2007.

"Managing a county budget is similar to running a household budget. You decrease expenditures, increase revenues and use savings," Townsend said.

The county has cut $2.1 million from its general fund spending last year. Currently more than 100 positions are frozen. Officials are preparing to cut costs by approximately 7 percent this year and an additional 7 percent next year. Officials anticipate the state of Arizona will continue slashing funding and shifting costs to counties for state-mandated programs. Thus far, the state has passed $13 million in costs to Coconino County. Overall, counties have seen a $120 million impact from cost shifts and unfunded state mandates.