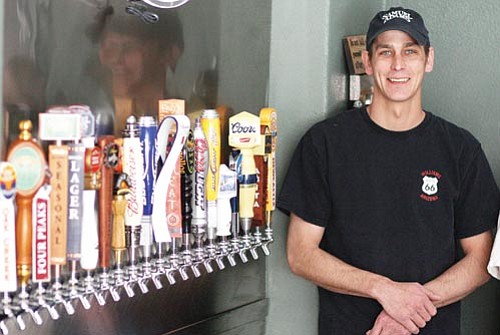 WILLIAMS - Diners at Twisters 50s Soda Fountain and the Route 66 Café can now enjoy a cold beer with their Chicago dog.

As the economy began to slump over the last few years, Owner Jason Moore decided to convert much of his retail space into a bar.

"The main reason for doing it is we get a lot of tourists coming in in big groups of 10, 12, 15 people," he said. "They would sit down and you'd take their drink order. They would say beer and we didn't have beer. They would walk out of the restaurant and go someplace that served alcohol. We were losing money on that."

Moore said the process of securing the necessary approvals and permits to serve alcohol was a lengthy one. City council approval was required initially, followed by state approval for the liquor license itself.

Moore said he offers 20 beers on tap. Mixed drinks are also available. Moore went on to say that he hopes to attract more local clientele to his establishment. On Tuesday evening, many local residents have taken to watching American Idol and enjoying a cold beverage at the bar.

Along with more and more locals discovering the new bar at Twisters, Moore said many of his customers visit from all over the world.

"We've got a tourist sign-in book up front and it's probably got every country in the world that has come in here at one time or another," Moore said.

Moore has owned and operated Twisters since May 2006. He said he redid everything, including the plumbing, electrical, and flooring.

"We expanded the restaurant," Moore said. "It used to have six tables in here. We added booths. We can seat 64 in the main area of the restaurant now." Moore added that the restaurant can now seat an additional 30 customers in a secondary area.

Twisters serves the same type of food found in diners of the 1950s with a menu that includes ribs, hot dogs, hamburgers and catfish. The restaurant is open Monday through Saturday from 8 a.m. to 10 p.m. The restaurant can be reached at (928) 635-0266.