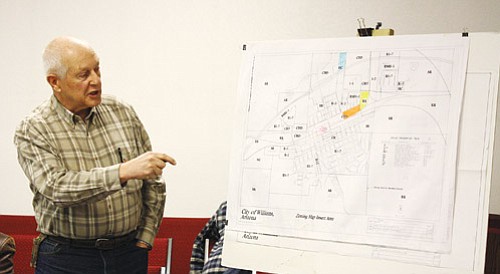 WILLIAMS - Al Richmond, president and CEO of the Arizona State Railroad Museum, visited with members of Williams City Council March 11 to talk about a possible land swap that could benefit the proposed historic railroad museum. Richmond explained his hopes for the swap during council's regular meeting. While not approving the land swap itself, council members encouraged Richmond to proceed with the swap.

Richmond said the project would have to move forward, and quickly, if it were to be a part of the 2012 Arizona Centennial celebration.

As a centennial legacy project, Richmond said the clock is ticking on getting the proposed museum in the ground.

"We've got to get moving on this to make the centennial date," Richmond said. "We've got about a two-year build-out comfortably, a year and a half scrambling. Part of getting it in the ground is establishing the land."

"I think it's a great thing we're doing," McNelly said. "I just want to make sure that, when things get rolling, say the numbers come out good, that we haven't already said we're going to do it."

"You're not approving the swaps at this point in time," Richmond said.

The exchange would trade a 15.4 parcel of city-owned land north of Interstate 40, located on Airport Road, to the Xanterra-owned Grand Canyon Railway company. The railway would in turn give a parcel of land within the middle of Williams to the city, which could be leased by Richmond and the railroad museum. The possible museum would be located near the curve in the current railway where the track goes from east to north.

"The city would remain the landowner. In this trade, you're not donating and its not being deeded over to the museum," Richmond said.

"The mayor and Councilman Dent and I have been talking with Xanterra, exactly a year now this month about this. We've been talking about as little as five acres," Richmond said. "What we will be asking for is about 13 and a half acres in this proposal if we go forward with this."

He said the land swap could allow for the museum to have a dedicated parcel of land that the museum could call home.

He said locating the museum closer to downtown would benefit both the railway and the museum in the long term.

"It will create a place for people to congregate that will increase business in that area," Richmond said, adding that the two organizations would also partner up for a number of events and projects should the museum go through.

"It will be a symbiotic relationship," Richmond said.

There are a number of possibilities when it comes to the deal, including a straight trade that would hinge upon a land appraisal that equates the two properties equally, Richmond said.

"We would want to do this with no cash involved," Richmond said. Money for the appraisal would be covered by the museum and not the city, he added.

"What you're asking for tonight is to, on your nickel, do appraisals (and) at this point there is no city involvement until you get those appraisals back," said Mayor John Moore.

Besides his involvement in the museum, Richmond said he has been asked to take part in other upcoming centennial activities as well.

One of the steam engines would likely pull into Williams, he added.