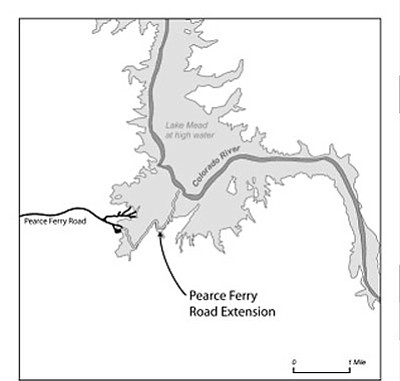 The lowering lake level of Lake Mead, down more than 120 feet over the last 10 years, drove the road extension project. Access to the waters of Lake Mead was closed at Pearce Ferry in 2001 when the water elevation dropped to 1,175 feet. Today the elevation of Lake Mead is at 1,100 feet.

Over the last 10 years, the Colorado River has scoured a new channel in the silts deposited by the waters of Lake Mead. While most of the river follows the old river channel, a slight deviation from the previous channel occurred near Pearce Ferry, creating a new and significant rapid.

The development of the large rapid limits upstream travel for the 16 river-running companies that have concession contracts with Grand Canyon National Park for rafting the Colorado River.

The primary purpose of the road extension is to provide for river take-out operations for private and commercial river runners. Due to the close proximity to the developing rapid, the public launching of boats is prohibited. The river running take-out and de-rigging area is closed to swimming, fishing, camping and shoreline fires to prevent conflict with river runner operations. The public prohibition on launching will be revisited in one year following an evaluation of the risk to river runners from the developing Pearce Ferry Rapid.

"During this period of historic lowering water levels in Lake Mead the National Park Service and its concessionaires have worked diligently to ensure public access to all recreational activities," said Lake Mead NRA Superintendent Bill Dickinson

The six-month construction project was completed at a cost of approximately $1,000,000, and was funded by entrance fees collected at Grand Canyon National Park, and built by Interstate Rock Products out of Hurricane, Utah.