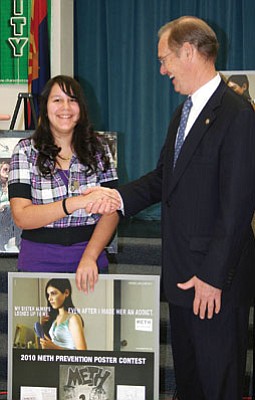 Submitted photo Alyssa Castillo, a seventh grade student at Williams Elementary-Middle School, is congratulated by Attorney General Terry Goddard. She was recognized for winning second place in the 2010 Meth Not Even Once Poster Contest. Castillo's artwork was incorporated into the poster.

Research-based prevention ads depict the destructive impact meth can have on the friends and family of those who use the drug. The radio, print, and television ads that are at the heart of the campaign are airing in the greater Phoenix area media market with a hard-hitting message. In November, the Arizona Attorney General's Office and Arizona Meth Project invited seventh and eighth graders across Arizona to participate in the Meth Not Even Once Poster Contest. The contest is part of a comprehensive campaign to make young people more aware of the dangers of meth. More than 500 students submitted entries.

"The Not Even Once message communicated in these gritty ads is clearly working," Goddard said. "The Arizona Meth Project has achieved profound changes in the way methamphetamine is perceived by Arizona children and families. Since the launch of the Arizona Meth Project campaign, use of the drug among youth has significantly declined, falling by more than half in many categories. For years, meth has been the number one problem for law enforcement in Arizona.

"Given our state's economic challenges, preventing crime becomes all the more important. By keeping our communities safe, we also can save public dollars. One area where we can make a big cost-saving difference is drug prevention, and in particular, preventing meth use. Methamphetamine costs the United States nearly $24 billion a year, according to a study by the RAND Corporation," Goddard said.

The 2010 poster, along with the winning artwork and more information about meth, can be found on the Attorney General's Web site at www.azag.gov, as well as on the Arizona Meth Project Web site, www.arizonamethproject.org.