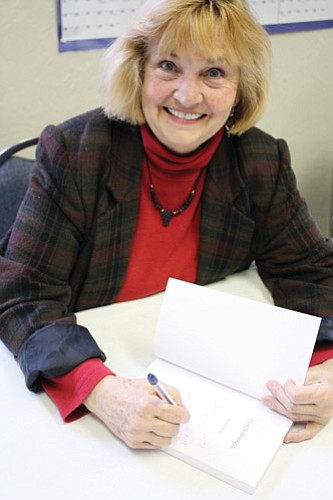 WILLIAMS - When it comes to writing, the task of getting that story completed can often be a lonely one. Individuals from coast to coast have thought about it one time or another, however, whether it be writing their memoirs, that idea for a children's book, or the Great American Novel. Actually writing the project into a manuscript, however, is a solitary act. When questions arise, there can often be no one to turn to for help. Author Cosette Riggs hopes to change all of that. Her new authors' group is designed for writers to help each other and to make the challenge of writing an easier task.

Riggs, author of the book "Peach Springs," formed the authors' group last month. The group will meet for their second gathering this Saturday at Camp Civitan. The meeting begins at 10 a.m. Meetings are held monthly.

"We're not there to read each other's books. We're there to help each other," Riggs said. "There are so many people who want to write, they just need a little nudging."

The group is more than simply writers sharing stories, she said, it is about helping other people by offering writing services, information, and other assistance. She said she would like to find an agent to come and speak with the group in the future. Well-known novelist Gary McCarthy will also be among those in attendance for Saturday's meeting, Riggs said.

"Not only do I want to pull in the wannabe writers, writers for over 30 years like Gary is, but historical writers, people maybe helping older people write their biography. At our next meeting, people can sign up with Gary for a class on how to write your biography. I would also like to get some English majors, someone who would not charge too much money, to help put their book into Word and help them to finish the project," Riggs said.

Riggs said that, with members helping one another, the process of writing successfully could be made easier.

"I think with all of us networking, we can help each other," Riggs said. "I am excited to do this. Bring your questions, bring your expertise, bring your ideas and let's help each other. I don't know why we don't share more. It's like we re-invent the wheel when we could help each other. We can say, 'Don't go there. Those people want a lot of money and then you're going to have to do the work anyway.'"

With a Web site at www.inspiredoriginals.net, Riggs said she is working to provide an online platform for the group. A link for herself and McCarthy is currently available on the site. Besides writing, the site also serves as a social center for a number of other topics as well, including an advice column written by a number of grandmothers. Posts for local events will be included on the site, Riggs said.

Riggs is in the process of turning "Peach Springs" into an audio book. She's currently working on two other projects as well, including a self help book on children who take care of their parents in their older years and a fantasy novel for teens.

"Peach Springs," while set in Arizona, begins in Chicago. The novel centers on a woman who takes a group of people west. Besides writing the book, Riggs also painted its cover. She's sold copies of the book from her Web site and from Amazon.com. The book came out last year. Riggs lives in the Williams area with her husband, Charlie.

"My brother, who is the worst critic in the world, loved it," Riggs said. "In fact he wants a sequel. The sequel is about 50 pages done already."