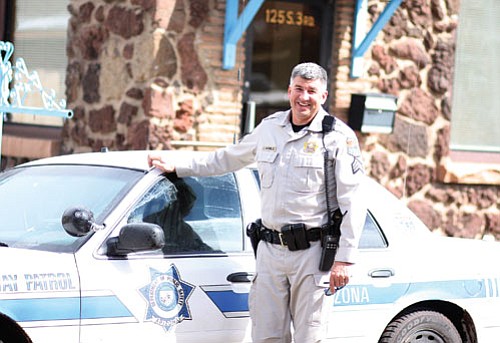 <br>Ryan Williams/WGCN<br> Sgt. Jeff Brownlee intercepted a fugitive bank robber on the run from California last Friday. The suspect is in custody in Coconino County Jail on felony flight charges.

WILLIAMs - A suspect on the run from California wanted for armed robbery was taken into custody after a high-speed chase that began just east of Williams Friday morning.

Sgt. Jeff Brownlee of the Arizona Department of Public Safety in Flagstaff said that he and Sgt. Gary Phelps were in the median on Interstate 40 near Garland Prairie Road measuring an accident scene at about 9:45 a.m. March 5 when they received an attempt-to-locate bulletin. The bulletin was for an armed robbery suspect out of Tulare County, Calif. The suspect was driving a 2002 Lincoln LS passenger car.

Law enforcement officials were able to locate the suspect's vehicle by tracking his cell phone, placing him near milepost 145 heading east on I-40.

"We didn't know if he had turned to go south on 89 or anything but we thought we would set up and there would be a good possibility that we'd be able to catch this guy," Brownlee said.

Just after the bulletin, Brownlee said he and Phelps were able to identify the vehicle as it passed their location.

"Additional information came in that this guy was heavily armed and would want to have a shoot-out plus, he was involved in a pursuit just the day before with California authorities," Brownlee said.

Brownlee caught up to the suspect near milepost 170 in the Davenport Lake area. The suspect was not pulled over immediately while more officers responded to the pursuit.

"Pursuits are dangerous," Brownlee said. "This was actually one where we could plan ahead."

Flagstaff units were stationed just east of the A-1 Mountain overpass. At milepost 188 Brownlee and Phelps initiated a felony stop on the vehicle prompting the suspect to flee at high speed. Brownlee estimated the suspect was driving 130 mph when he hit tire spikes at milepost 190.

The suspect eventually stopped the damaged vehicle near Black Bart's restaurant and was taken into custody without incident.

Russell Havner, 42, was booked into the Coconino County Jail on felony flight charges. Brownlee said officers found 12 pounds of marijuana along with ammunition in the vehicle. No firearms were recovered.