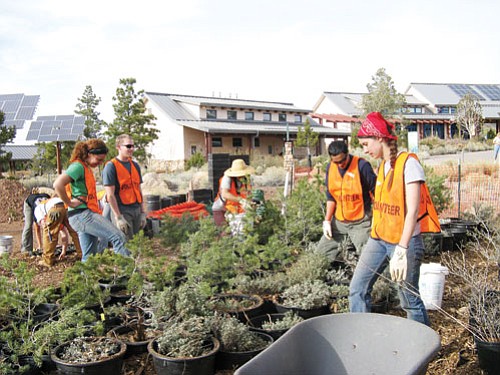 This year, ASB participants will assist staff from Grand Canyon's Division of Science and Resource Management with the planting of native vegetation in former constructions zones near the Grand Canyon Visitor Center, salvage of plants prior to new construction, and removal of graffiti along the Bright Angel and South Kaibab Trails.

"The students accomplish a tremendous amount of work in a two-week period, and they do it with enthusiasm and boundless energy," says Vegetation Program Manager Lori Makarick. "We have cared for thousands of native plants over the winter at the park's native plant nursery, and with the arrival of spring, we are excited to get them into the ground at the Visitor Center and really kick off our field season."

In addition to completing the volunteer projects, students will have the opportunity to attend special presentations about park resources and the National Park Service mission and to explore the park on their own.

Dave Rogers served on the SCA Native Plant Corps Team that spent three months restoring native vegetation near the Grand Canyon Visitor Center in 2009 and is the project coordinator for the Alternative Spring Break.

Rogers said, "My SCA internship was a great vehicle to experience a national park in a greater capacity than that of just a park visitor. Working for the SCA Native Plant Corps allowed me to really experience an action level of conservation; and my work had an immediate impact."

"I am thrilled to be back at the Canyon and am looking forward to turning students on to the same type of conservation work that has had such an impact on me. The SCA Alternative Spring Break program gives college students a chance to make a lasting contribution in the park. Some will see the Canyon for the first time, and all participants will gain insight into the National Park Service and a greater understanding of park management that will inspire future conservation efforts."

Deputy Superintendent Palma Wilson said, "It is very exciting that SCA's Alternative Spring Break is returning to the Grand Canyon in 2010. The students accomplished so much during the last two spring breaks. I especially appreciate the contributions that SCA makes towards the preservation of parks as I am one of many National Park Service professionals at Grand Canyon who got their start as an SCA intern"