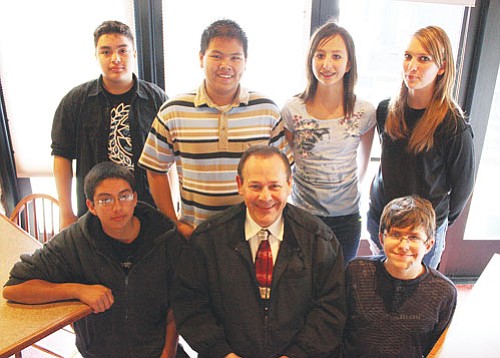 WILLIAMS - Local middle school students were treated to a special lunch March 4 with members of the Williams Rotary Club. Six students, winners of the recent Williams Middle School "Knowledge Bowl," were introduced to Rotarians, who in turn told them a little about the club itself. Teacher John Lechtenberger introduced the students to Rotarians during the recent meeting. Knowledge Bowl students included Jeff Ellico, April Zicopoulos, Noel Calderon, Shean Ponce, Chanelle MacRae and Julio Belmontes. The six were treated to lunch at the Grand Depot Café for their performance at the Knowledge Bowl.

"We have a school goal to move from a performing to a performing plus school," Lechtenberger said, adding that criteria for the goal include academic scores, attendance and other ingredients.

"One of the ways that we can do it is to make it fun," he said. "That's what the Knowledge Bowl is all about."

As part of that, school officials purchased an electronic game device, similar to the game show Jeopardy, Lechtenberger said, that allowed youth to compete with one another.

"I set up a competition that would be two phases: a written round and then an oral round. Because I worked in Social Studies, the first part of the test was written and it was based on Articles 1, 2, and 3 of the Constitution, the three branches of government," Lechtenberger said, adding that select students were then invited to take the test. The test came down to six students.

Student Jeff Ellico said he plans to be a novelist when he grows up.

"I really like the Knowledge Bowl," he said. "It was a fun activity."

Lechtenberger said a number of groups were involved in the Knowledge Bowl, including the local parent/teacher organization, the school's site-based council and others.

"It was a very successful program. Fortunately we didn't have any snow that night and we had about 60 people that showed up for the competition," Lechtenberger said.

Since then the school has begun adding to the Knowledge Bowl to include other areas, such as science and math. School officials recently held an "Invention Convention" as part of the program.

"That's what our plans are. We're looking forward to more of these competitions," Lechtenberger told those at the March 4 Rotary meeting.

Besides meeting students from Williams Middle School, members of the Williams Rotary Club also listened to a presentation from fellow Rotarian Todd Yung, owner of Hound Dog Electric. Yung presented an idea to members that he said could lead to sustainable revenue for the club.

The plan would include a snail fund that Rotarians could add to continuously, rather than from one event alone. A perpetuity fund, Yung said, would take some of the pressure off the group's primary fundraiser in time. Rotarians currently hold the annual Western Auction on an annual basis, which helps pay for student scholarships provided by the group. Rotarians agreed to consider the idea at the conclusion of the March 4 meeting.

Yung said the idea for his presentation came during the last Western Auction - while he and others dug through the trash at 1 a.m.

"We were digging through the trash trying to find a couple of copier lids and I thought maybe there is another way to go about this fundraising scholarship program. I think this idea has been brought up before," Yung said. "This is kind of an idea to start squirreling away some money in a perpetuity. It takes a long time to do this."