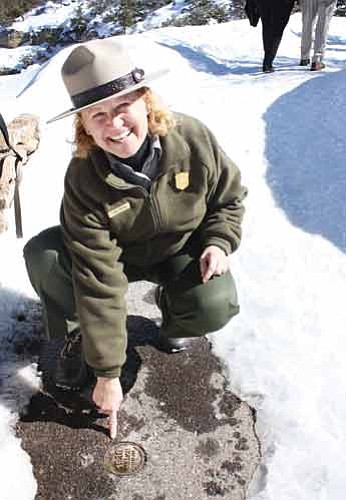 <br>Patrick Whitehurst/WGCN<br> Chief of Interpretation and Resource Education Judy Hellmich-Bryan points to a marker that is part of the South Rim's Trail of Time project, scheduled for completion this summer.

GRAND CANYON, Ariz. - The Grand Canyon's vast history will soon be a physical addition to the South Rim, as work continues on the Trail of Time - what national park officials are calling an interpretive walking trail, in which every meter of the path represents one million years of Grand Canyon geology. The trail itself will extend from Yavapai Observation Station to Verkamp's Visitor Center.

According to Judy Hellmich-Bryan, Chief of Interpretation and Resource Education for the Grand Canyon National Park, every meter of the trail will represent a million years of the Earth's history. She said time zero will be located at Grandeur Point.

"If you walk from Grandeur Point to the Verkamp's Visitor Center, you have basically walked 1.84 kilometers, which is the oldest rock in the Canyon," Bryan said. "You can approach it from either side. You either start at Yavapai and walk back in time, or you can start at Verkamp's and walk forward in time. Along the way there will be big rock entryways. This will be a profile of rock built from the different rock layers of the Canyon."

The waysides, Bryan said, are 24 by 36 inch panels. Thirteen of them will be located along the Trail of Time. Wayside stations will document events such as the Cambrian explosion, the uplift of the Colorado Plateau and other topics.

"As you walk along the trail and there were significant things happening geologically, there will be these wayside interpretive panels," Bryan said. "There are four major things: there's entryways, there's waysides, there are the markings along the trail (every 10 meters there is a four-inch marker, every meter there is a one-inch marker, so that's how you know where you are), the fourth component is actual rock samples. We have collected a rock from every single layer of the Canyon, which are 70-plus layers. We're going to have samples of all of those rocks."

The goal of the trail is for visitors to understand the vast geologic history of the Grand Canyon by utilizing a portion of the existing South Rim trail. Markers will be located along the trail at one meter intervals, with every meter (or every step) representing one million years of the Earth's 4.6-billion-year-old history, according to park rangers. The Trail of Time is made possible by the Informal Science Education Program of the National Science Foundation, which provided $2 million for the project.

"The whole thing is being done with a grant through the University of New Mexico, with National Science Foundation funding. It's not a park project. I have been working with Dr. Karl Karlstrom, from the University of New Mexico for the nine years that I have been here on this project," Bryan said. "The projected completion date is June of 2010. That's when we'll have all the wayside panels in the frames, the rocks will all be along the trail, and then we'll do a final evaluation with visitors. In the fall, in October, we're having a Trail of Time symposium, where we're inviting geologists, interpreters, scientists from all over the country are invited to come in and experience the trail and learn how the planning went, what we learned from visitor evaluations on what would work and what wouldn't work. It's a really cool project."

While visitors to the park will find the trail beneath their feet, online visitors will find a Web-based component of the trail as well. Called the "Virtual Trail of Time," the site is hosted by the University of New Mexico, though the content is currently under development. The site can be found at www.trailoftime.org.

The next phase of construction on the trail, scheduled to last about six weeks, began March 1. Construction during this phase will include the creation of four entry points to the trail. Entry points will be located at Yavapai, Grandeur Point, the intersection of the Rim Trail and the HQ Trail, just east of Verkamps. Construction will also include the installation of wayside exhibit bases, viewing tubes, and landscaping that will include rock samples from each layer of the Grand Canyon.

"We have a really cool rock, a volcanic rock, that actually has a pot shard in it. When you think about when the volcanic field of northern Arizona was active, the Sinagua Indians were actually living here and there was pottery in that volcanic rock. Every rock layer is represented along the way," Bryan said.

"It's going to give visitors a chance as they walk through time to kind of connect with the Canyon without having to go into it," Bryan said. "There are a lot of people who cannot physically can't get into the Canyon or they choose not to, but you don't have to take a river trip to touch to touch Elves Chasm Gneiss which is the only way to get to that section of the Canyon where that rock is."