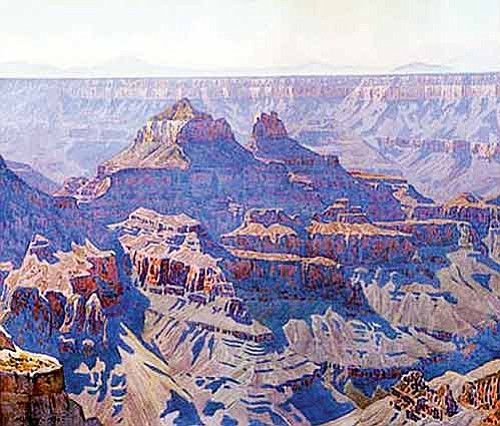 <br>Image courtesy Grand Canyon Association<br> Gunnar Widforss painted a number of images of Grand Canyon, including the above watercolor on paper piece. His work will be on exhibit as part of the Picerne collection that will be on display at Kolb Studio.

GRAND CANYON, Ariz. - Ever wondered what the difference is between Realism, Tonalism, Cubism, Impressionism, Pointillism and Expressionism? Find out in April, as artwork from all of these categories will be on display at the South Rim's historic Kolb Studios. Paintings from a number of different styles, as well as from a number of schools and associations will be on display from April 2 to June 20 as part of the Picerne Collection of Arizona Landmark Art. Called Canyon Magic, the exhibit features artwork from schools and associations such as the Taos Society, California Impressionists, California Watercolorists, the Desert Painters, Arizona women artists, and Santa Fe Railway artists.

The collection resulted from a collaboration with art collector David Picerne, president and CEO of Picerne Real Estate, and Gary Fillmore, art expert and owner of the Blue Coyote Gallery in Cave Creek. Fillmore is also an art appraiser, dealer, collector and author. He's currently at work on his newest book "The Artists of Kayenta," which is scheduled for publication in 2010.

He said painters flocked to the Canyon for the artistic challenge represented by the area.

An opening reception for the exhibit will be held April 7 from 7-9 p.m. at Kolb Studio. The show is the collection's first major solo exhibit and will focus on early 20th century landscape paintings. Artists featured in the collection range from lesser to well-known names, such as Gunnar Widforss Joseph Henry Sharp, Birger Sandzen, W.R. Leigh and Edgar Payne.

"Edgar Payne was the founder of the Laguna Beach Art Association. That is a very well known association in California Impressionist circles," Fillmore said.

Besides the Grand Canyon itself, Fillmore added that artists would also come to the area for the cultural experience it offered in the form of Native American tribes.

"Back then they were very drawn to living with the people in their traditional ways. They were as captivated by the people almost as much as they were to the scenery," Fillmore said.

His Cave Creek gallery, like the Picerne collection itself, offers a wide range of regional art. The gallery can be found online at www.bluecoyotegallery.com.

"We specialize in regional, early 20th century art. Regional can be kind of a relative term. We define it as Arizona and the California desert painters and the Arizona Native American art," Fillmore said.