Editorial: There can never be too many local events 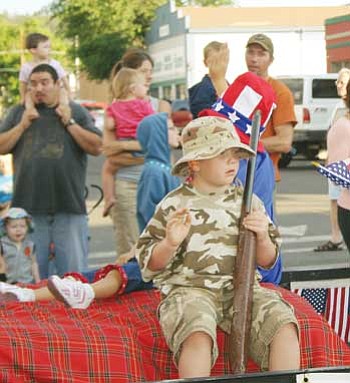 On Saturday, a first-ever Triple Crown barbecue cook-off will be held at the visitor's center in downtown Williams. On Sunday, an amateur cook-off will be offered. Both days offer live entertainment, tasting opportunities, bocce and a beer garden. Resident Chuck Vaughn has worked for months with the Williams Main Street Association to make this event a reality. We appreciate Chuck's efforts and hope this cook-off returns annually as there is no such thing as too many local events.

The barbecue cook-offs are not the only reasons to be out and about this weekend. The weekend promises to be busy throughout Williams. We welcome the Cowboy Shooters Association tomorrow through Sunday as they host the Railhead Shoot at the shooting range north of Williams.

The Arizona Vintage Baseball League from Phoenix will play a game against the locals at 2 p.m. Sunday at Cureton Park. The league will play a special exhibition game at 7:30 p.m. The Williams Rotary Club is hosting their annual barbecue there beginning at 7 p.m.

Parade organizers are hoping to beat the large numbers that came out for last year's parade. The parade begins at 6 p.m. and will cruise along Route 66. This year's parade celebrates 101 years of Fourth of July parades in downtown Williams.

The Northern Arizona Antique Tractor and Engine Association is returning and will display their tractors on Second Street Saturday and Sunday. The tractors will appear in the parade, too.

Due to the July 4 holiday, the News will be closed Monday. We will reopen at 8 a.m. on Tuesday. The Grand Canyon News will be sent to print Friday. Please turn in Grand Canyon News submissions by 5 p.m. tomorrow. As always, we appreciate contributions from citizen journalists. If you see something unique this weekend, please click a photo and send it in jpeg format to

editorial@williamsnews.com. We can't wait to see photos of you having fun over the Fourth.