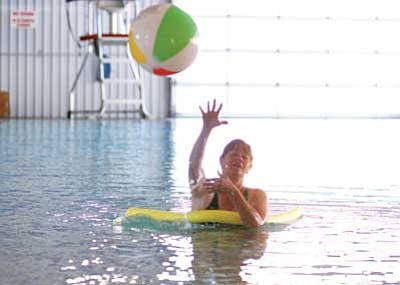 Ryan Williams/WGCN<br> Williams Aquatic Center Coordinator Sherry Sleeper has a ball at the local pool, which will reopen to the public Tuesday.

WILLIAMS - Take a splash at the Williams Aquatic Center.

That's what officials in Williams are hoping residents and visitors will do with the reopening of the Williams Aquatic Center. The pool is expected to open once again Tuesday through Aug. 7. City officials said they would continue to evaluate the facility following the six-week period.

The decision to reopen the pool came following a special meeting of Williams City Council on June 15. Williams Mayor John Moore said the opening of the pool was part of a "good faith" gesture to the residents of the community.

"The ad-hoc pool committee was there. They were all in agreement with it," Moore said. "It's a good faith thing to show that we all want the pool open. It's just a matter of money and what comes first. If we have money, then we open the pool like it used to be. If we don't, it may not."

Part of the decision to reopen the facility, Moore added, came from a desire to provide swim lessons to youth in the area.

"I think, as a council, we thought it was important for our kids to have swim lessons. That was part of the decision that, if we could open it for six to eight weeks, that they provide swim lessons, not just a swimming hole so to speak, but a place to teach our kids to swim. That was, in part, why we chose to do it that way," Moore said.

The pool will reopen at a cost of roughly $30,000, according to city officials, $8,000 of which could be offset in revenue from the facility itself.

"As we worked on the budget for next year, we projected a little more income than we thought we might have, so we allocated it out of that," Moore said.

"The price has gone up a little bit. We set some rates to try and recover some of the money that we spent," Moore said. "It would certainly be a help if the ad-hoc pool committee could start to raise some money and get some grants. They're working hard at it. If they can find a way to help fund it, it might help us farther along to open it full time at some point."