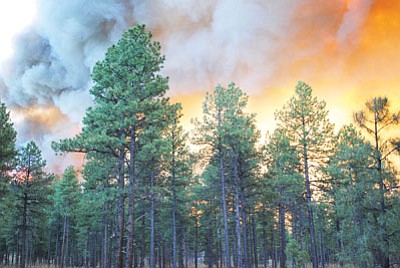 Photo/Kaibab National Forest<br> The Eagle Rock Fire located on the Williams Ranger District has been declared 70 percent contained. Crews were since allocated to fires in the Flagstaff area.

Residents in Spring Valley evacuated last week as a result of the Eagle Rock Fire burning on the Williams Ranger District have been allowed to return home now that the blaze has been declared 70 percent contained.

As of Monday, the wildfire, located 11 miles northeast of Williams and on the northeast side of Sitgreaves Mountain, remained at 3,420 acres with Forest Service officials projecting full containment later this week due to resources relocated to the Hardy Fire and Schultz Fire, both burning in Flagstaff over the weekend.

Over 170 crewmembers were pulled off the Eagle Rock Fire on Sunday to respond to the Schultz Fire, which grew to 3,000 acres in less than five hours.

On Monday fire crews began mop up operations including increasing containment lines and searching out and extinguishing hot spots or burning embers. Crews plan to drop trees compromised or weakened by the blaze.

Kaibab Lake on the Williams Ranger District remained closed to boating on Monday due to fire operations.

Forest officials believe the Eagle Rock fire began June 11. The cause of the fire remains under investigation but is believed to be the result of lightning.

Some in attendance voiced concern that response time by the Forest Service was slow at best.

"Obviously we feel that it is important to get to fires really quickly," she said. "In this particular case, the concerns the citizens had was that they had called into the dispatch office on Tuesday after the dispatch center had closed and they left a voicemail message there reporting the fire. The dispatcher didn't get the message until the next morning when the dispatch shop opened back up."

Banks said when the dispatch office opened at 7:30 a.m. Wednesday morning, an engine was sent out and lookout stations were notified to begin searching for fire activity and smoke. The engine crew contacted the individual who left the initial voice message to enlist their help in locating the fire. At 9:40 a.m. Kendrick Lookout spotted smoke.

"What should have happened is, the phone lines at dispatch should go to an answering service and what happens then is you get a person and that person takes the information and gives it to the on call dispatcher," Banks said. "For whatever reason, and we're looking into it, the call did not go to the answering service. It went to a voicemail."

Banks went on to say calling 911 is always an option when reporting possible wildfires.

"We want to make sure that on the dispatch voicemail it says 'If you can't get through to a person, please call 911,'" she said. "If you haven't been able to speak to a dispatcher then that would be the mechanism and that unfortunately didn't happen in this case."

By Wednesday, June 16, the blaze had scorched 1,000 acres, forcing the evacuation of about 60 residences in the Spring Valley area and burning two outbuildings and damaging two utility trailers. Firefighters made progress overnight by conducting burnout operations and putting in dozer lines.

As of Thursday morning, approximately 250 fire personnel continued working to suppress the spreading wildfire with the Northern Arizona Type 2 Incident Management Team assuming management of the fire at 6 a.m.

High winds and low humidity hampered firefighters' efforts. Winds on Thursday ranged between 11 and 17 mph with gusts up to 25 mph. Humidity levels hovered around 11 percent.

By Friday, the fire remained at approximately 3,400 acres and was 40 percent contained. Almost all evacuated residents returned to their homes but due to smoke and firefighting operations in the area some residents remained evacuated. A portion of Spring Valley Road (County Road 141) remained closed and an Emergency Fire Closure around the immediate fire perimeter was in place.

More than 500 fire personnel including 16 20-person crews, 19 fire engines and one helicopter continued to fight the fire.

On Saturday, fire crews reached 50 percent containment. Remaining evacuated residents were allowed to return to their homes and Spring Valley Road was reopened. The emergency fire closure around the immediate fire perimeter remained in effect.

Forest officials report that Spring Valley Cabin was not damaged by the Eagle Rock Fire, largely due to forest thinning projects taking place over the last few years.

For more in formation on the Eagle Rock fire as well as the Shultz and Hardy fires in Flagstaff, visit www.inciweb.org.