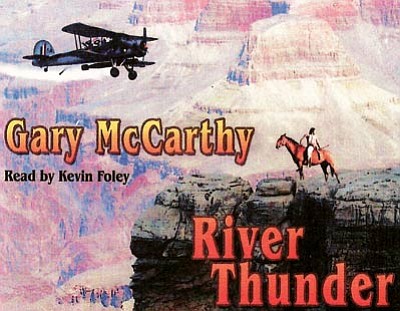 The cover of the ‘River Thunder’ audio book.

WILLIAMS - Local author Gary McCarthy will be in Knoxville, Tenn., this week to collect a prestigious Silver Spur Award - the accomplished Williams-based author's second such award. McCarthy is being honored with the award by the Western Writers of America, who named the audio book, from McCarthy's latest novel River Thunder, as the best of 2009. The novel was adapted by Books in Motion and read by Kevin Foley. The audio book runs 11 hours in length.

In his novel, McCarthy takes a young Hualapai boy, the title character, from the Hualapai Reservation and places him in the Hackberry Day School in 1902. In what McCarthy calls a coming of age story, River Thunder deals with forbidden love and the perils of aerial warfare in World War I, among other themes. The author said he got the idea for the novel, as well as the flute-playing River Thunder character, while researching in the Peach Springs area with his wife, Jane. While visiting with the Hualapai, McCarthy spoke to a number of individuals who have attended Indian school in the area. The Hackberry Day School, he added, still stands on Route 66 today.

"The Hualapai people are the People of the Tall Pines. They are a quiet and very dignified people and I'm just very interested in their culture and their creationist story," McCarthy said. "With this novel, I was privileged to learn a lot about their culture. They have certain secrets like the Navajo and the Hopi that they aren't going to tell us. For instance their 'meet to cry' that they have once a year - where they would all get together, and they would cry, and they would talk about the relatives that had passed that past year, also their feelings about the Earth and the sky and the eagles, and how close they are to where they live, and how they feel so special to be living there at the Grand Canyon."

River Thunder was a project that took McCarthy a number of years to complete.

"I worked on and off on this book for probably five years and got to the point where I really liked the story," McCarthy said. "I originally started out going one direction and then I decided that I would take the boy with the flute, because I was listening to flute music quite a bit, and that came into it."

He said the book covers a time period that he finds personally fascinating.

"I liked covering that period, with the transition from the horse to the automobile, and during World War I. I don't think a lot of fiction has been written in that area and it's not a traditional western set before, say, 1885 and it's not a modern novel. There's so much going on with the Spanish influenza and World War I. It was just fun to research for me," McCarthy said.

McCarthy has written a total of 34 western novels and 14 American historical novels during his 30-year career. An estimated three million copies of his books have been sold to date. The Williams resident is also a member of the Northern Arizona Authors Association based in Williams. Their website can be found at http://nazauthassoc.webs.com. The River Thunder audio book can be found online at a number of web retailers. It can also be found on

For his next project, McCarthy said he's working on a novel that explores the clash of cultures, religion and spirituality.

"In my next novel, I am thinking about creating characters who reflect these fundamental differences based on their respective cultures and life experiences," McCarthy said. "I think it is always interesting to put characters in uncomfortable positions that challenge their basic assumptions and beliefs and see how they react. Also, I'm quite interested in placing this cultural conflict in the early 1900s when so much change was going on, horses to iron horses and cars, people having to deal with a new age, new ideas and new opportunities."