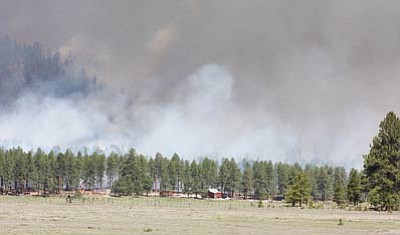 Ryan Williams/WGCN<br> Smoke from the Eagle Rock Fire blankets the Parks community the morning of June 17.

WILLIAMS - Firefighters continue working to suppress the 1,000-acre Eagle Rock Fire on the Williams Ranger District of the Kaibab National Forest. The wildfire, located 11 miles northeast of Williams and on the northeast side of Sitgreaves Mountain, has forced the evacuation of about 60 residences in the Spring Valley area and burned two outbuildings and damaged two utility trailers. As of 11 a.m. today no homes have burned.

"We had some aircraft up today getting a better look at it from the sky," Moore said. "Too winding yesterday, a little bit better today although this is really only supposed to last about a day and then it is supposed to get windy again as another front comes through. We were able to make some progress last night up on the northeast side of the fire getting some dozer line in up there. They'll continue with that today and also work to get some direct line over by Sitgreaves."

The biggest challenge facing firefighters continues to be high winds. Winds today are expected to be 11 to 17 mph with gusts up to 25 mph. Temperatures are expected to reach about 80 degrees, with relative humidity levels near 11 percent.

Moore said the fire has not been as active today although that will likely change as temperatures rise and relative humidity drops.

"We've had a little less fire activity today although we'll be heading into that most active period around 2 p.m. today," she said, adding that flame lengths reached as high as 100 feet yesterday during what she called "aggressive" wildfire behavior.

Moore said currently there is no estimated containment date for the Eagle Fire. Fire investigators have yet to determine the cause of the blaze, as access to the origin of the fire has been limited

A Red Cross evacuation center has been established at Maine Consolidated School in Parks.

Evacuated residents have not been allowed back to their homes.

"They are working hard to reinforce that area where the fire crossed 141 yesterday onto private property trying to get that nice and secure before we allow folks back into the area," Moore said. "The power lines have also been turned off so that's an issue too for folks returning to the area."

Kaibab Lake on the Williams Ranger District is closed to boating due to fire operations. The east side of the lake is closed to fishing. However, it remains open for camping.