Monsoons around the corner
Season officially begins this week 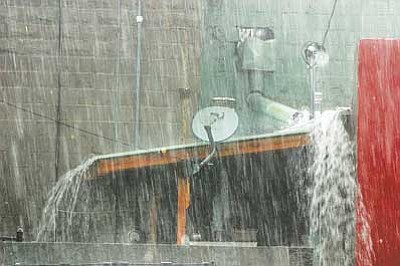 Patrick Whitehurst/WGCN<br> Weather experts said recently they are announcing monsoon seasons utilizing a safety-oriented method rather than by moisture measurements.

WILLIAMS - Spring has sprung and summer is here. In northern Arizona that means one thing. Monsoon season is upon us.

According to the National Weather Service, monsoon season officially began yesterday and will extend through Sept. 30.

Recently meteorologists have based the announcement of monsoon season on a more safety-oriented method.

"What we've tried to do is use an approach much like hurricane season and say here is a period during which we're likely susceptible to the hazards that thunderstorms would bring," Howard said.

Howard went on to say in Arizona the top hazard associated with thunderstorm activity is flash flooding. Approximately two to three people die annually in Arizona from flash floods. Lightning strikes follow close behind causing one to two deaths per year with downburst or outflow winds coming in third.

"The high winds and hail stones that we typically see tend not to be life threatening but they can still cause some significant damage," he said.

One of the most frequent causes of weather-related property damage in Arizona, the downburst wind also poses a danger to individuals in their vicinity from debris the winds pick up.

When precipitation falls from thunderstorms, air is dragged along with the moisture forming the storm's downdraft. Downdraft air becomes extra dense as a result of evaporative cooling causing the air to descend more rapidly than normal.

Once the downdraft hits the ground it fans out in all directions creating a downburst. Howard said thunderstorms in the region can produce downburst winds between 60 and 100 mph.

Howard said monsoon thunderstorms result from a combination of three factors - moisture in the air, an unstable atmosphere allowing air to freely move up and down and a lift mechanism, such as a mountain range, to push air upward.

"The thing that distinguishes our monsoon season is the fact that we roll all those three characteristics up at one time," he said. "Usually, the onset of the monsoon season is tied to the progress of moisture moving northward out of old Mexico, the Gulf of California and the east Pacific. That would typically happen in the early July time frame."