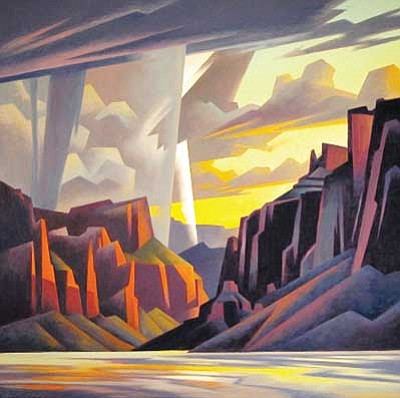 GRAND CANYON, Ariz. - It's been a fantastic year for organizers with the Grand Canyon Music Festival. The Native American Composer Apprentice Project (NACAP), a staple of the annual Grand Canyon Music Festival, was recently recognized as a top semi-finalist by the President's Committee on the Arts and Humanities for their 2010 Coming Up Taller awards. The committee partners with the Institute of Museum and Library Services, the National Endowment for the Arts and the National Endowment for the Humanities to recognize the local northern Arizona project.

"We work in such rural areas, it is very difficult for us to get national or even state-wide attention, despite the world-class programming we have. We are known within the music and arts community, but this recognition can help get the word out in a much bigger way about the work we do, and that is important," Hoffman said.

The Coming Up Taller Awards honor after-school and out-of-school programs that encourage creativity in youth and provides them with learning opportunities, chances to contribute to their community, and ways to take responsibility for their own futures.

The awards also celebrate the contributions that educators, curators, historians, scholars, librarians, and artists make to families and communities by mentoring and teaching children, Hoffman said. Accompanied by a cash award, the 13-year-old Coming Up Taller Awards not only reward these projects with recognition but also contribute significant support to their continued work, she added. The awards are expected to be announced next month.

Last month, organizers with the Grand Canyon Music Festival received a Governor's Award for Arts in Education. The annual ceremony was held April 19 in Phoenix. Hoffman, who lives in New York, attended the prestigious Arizona event. She said the recent accolades might be due to the music festival passing the 25-year mark.

"Outreach and education has always been an important part of our mission," Hoffman said. "Since 1984, the Grand Canyon Music Festival has been dedicated to bringing the world's finest musicians to Grand Canyon National Park in celebration of the power and beauty of this magnificent World Heritage site. Since 1985, the Festival has extended this gift of music to the students of northern Arizona's under-served and rural communities, including schools on the Navajo and Hopi Reservations. In 2001, the Festival initiated its Native American Composers Apprentice Project (NACAP) to extend its outreach to training talented Native American students in the art of composition."

The NACAP first began in 2000, during the residency of composer Brent Michael Davids. His work "Guardians of the Grand Canyon was presented at that time as part of the Continental Harmony Millennium Celebration.

"The piece inspired Havasupai elder Rex Talusi to note that it was through this kind of collaboration, young Native Americans working with their traditions in new ways, that their culture would live on," Hoffman said.

This sentiment inspired Hoffman and Davids, to develop the NACAP with the vision of creating a pool of young Native American composers.

"All of the composers and musicians who have been involved with NACAP have had an important role in shaping the program, from Brent Michael Davids (a member of the Mohican Nation) to our current composer-in-residence, the extremely talented young Navajo composer Raven Chacon, and several string quartets including the Miro Quartet (who were our first NACAP ensemble-in-residence), the Corigliano Quartet, and our current ensemble-in-residence, the string band ETHEL, made up of Dorothy Lawson, Ralph Farris, Cornelius Dufallo, and Mary Rowell. ETHEL has really taken the program to another level," Hoffman said. "It also couldn't happen without the fabulous teachers and administrators at our partner schools. We also are grateful to the support of Y.E.S. Dine' Bikeyah, which has been a really important community partner. And, of course, it couldn't happen without our very talented students."

More information on the Grand Canyon Music Festival can be found online at www.grandcanyonmusicfest.org.