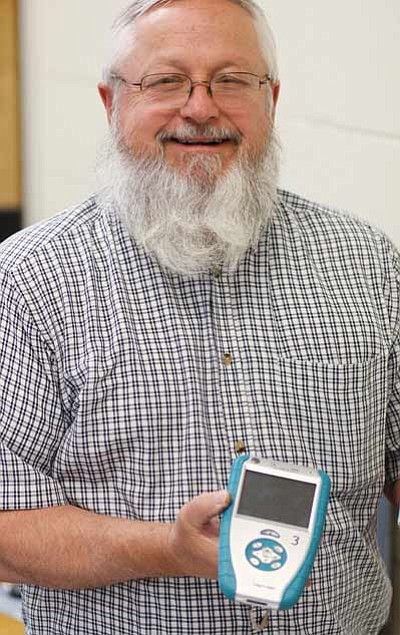 WILLIAMS - According to a report recently completed by students at Williams High School (WHS), evidence of mass wasting can be found in Williams.

It's not as scary as it sounds. Mass wasting, also known as slope movement or mass movement, is the geomorphic process by which soil and rock move downslope under the force of gravity.

The students found the evidence of mass wasting on the south side of the WHS football field using Geographic Information System (GIS) software and mobile data collectors while participating in the Northern Arizona Power of Data (POD) project.

The project offered jointly by the Center for Science Learning at Northern Arizona University and the Coconino Association for Vocation, Industry and Technology is funded through a grant from Science Foundation Arizona. Teams of one CTE teacher and one science or math teacher were eligible to apply to participate in the program.

Before teachers Larry Gutshall and Mike Fleishman could teach the course they needed to learn the content themselves. They began learning the curriculum and how to use the software and GIS devices in January meeting only once a month before presenting the material to students in April.

Fleishman said the students picked the football field as a study sight looking for characteristics of mass wasting and erosion.

"Basically the concept behind geographical information systems is that you can take samples and you can plot different points with different types of data, layer upon layer," he said. "When you do such an activity you can start to see patterns and information that you may not easily see without doing that. We were charged to teach this to our students."

The students mapped instances of bent and leaning fences, gopher holes, bent trees, gullies, popcorn soil and large areas of bare soil - all characteristics of mass wasting. They presented their findings along with recommendations for solving the wasting problem last week.

Kristi Fredrickson, professional development associate with the Center for Science Teaching and Learning at NAU, attended the presentation and said she was impressed with the students work.

"I've been in a lot of the classrooms over the last week or two and these guys are way beyond what I've seen in other classrooms," she said. "It's really a powerful tool and the kids really saw the different applications for how it can be used which is exactly what we wanted."

According to Fredrickson, one of the main goals of the grant program is to foster student interest in STEM careers - science, technology engineering and math.

"This program ties all of that stuff together and it definitely was the hook for a lot of these kids," Fredrickson said. "You could just see it. They're really into it and thinking of other ideas. I was so impressed. Not only did they learn how to use the tool but they learned to collect the data and analyze the data they collected. They just pulled everything together."

Eight teams participated in the first round of the POD program in schools in the Verde Valley and Sedona areas, Tuba City and Flagstaff Region. A second round of the program will begin in the fall.

Gutshall and Fleishman can continue to teach the GIS content as the district is able to keep the software and data collection devices from the program.

Gutshall said student reaction to the program was positive.

"They requested to the superintendent that they would like to have a class in GIS next year," he said. "My intent is to use it as a portion of my class. I'm going to have a unit on GIS next year for my drafting students."

Amanda Wamble said she learned new skills through the program and hopes to see it offered again.

"I really enjoyed taking this and I would really like to see it become a class on a regular basis," she said. "It encourages us to look around and notice things that we maybe wouldn't have noticed before. It was really fun. We got to walk around and learn and know how to use those data collectors and the GPS."