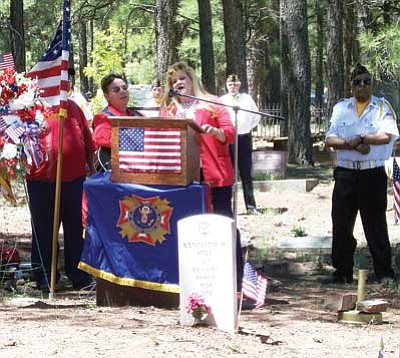 Doug Wells/WGCN<br> Debi Campbell and Pamelia LaPaglia sing an emotional tribute to Vietnam Veterans with a song entitled “More Than A Name On A wWall.” The song refers to the Vietnam Memorial in Washington, D.C.

WILLIAMS - Members of the American Legion Cordova Post No. 13 conducted a moving tribute to all veterans and to those who paid the ultimate price by giving their life defending America's freedoms. Legion officers Fred Avila and Eddie Aguilar addressed the largest crowd in memory to attend this event with thoughts and prayers for those who have served and their families. Musical numbers were performed by Michelle Donovan singing "God Bless America" and Pamelia LaPaglia and Debi Campbell singing "More Than A Name On A Wall."

Guest speakers for the event were veterans - Williams Police Sgt. Rob Krombeen and Vietnam Veteran and local realtor Dan LaPaglia. Krombeen detailed the history and meaning of Memorial Day and then read a list of Williams area residents who have lost their lives serving our country.

LaPaglia stressed the need for us to remember the great sacrifices made for all of us by those serving and dying during wartime. He urged those present to remember the foundations of this great country of ours. He stated that the Vietnam conflict was not a conflict, but a war where many brave Americans fought and died. LaPaglia related his personal experience of visiting the Vietnam Memorial and breaking down with his memories of soldiers he had served with. He concluded with fervor for the need for all of us to support our veterans and thank them for the sacrifices they have made to keep our country free.

Many mothers and family members of those who fought and died in recent wars were present at the service and were recognized for their loss and sacrifice. The service concluded with a 21-gun salute from the Cordova Post's Honor Guard and the playing of taps by Lucien Carle.

A tribute to our veterans is currently on display at the Masonic Lodge at Third Street and Route 66 in downtown Williams.