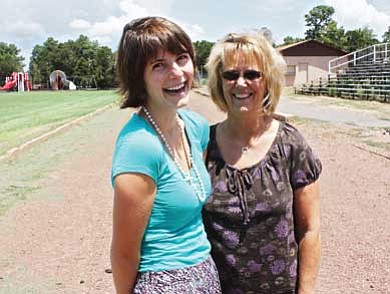 GRAND CANYON, Ariz. - Runners get ready! Registration is currently under way for the Grand Canyon Marathon Hermit Course. The marathon, to include a full and half marathon, will be held Nov. 6 and travel across the South Rim's Hermits Rest Road into the community of Tusayan outside the national park. Carrie Bazan, manager of the Grand Canyon Recreation Center and one of the organizers for the event, called the second annual run a way to build pride for the Canyon community.

"This is our going to be our second marathon. We had one in 2008. We were approached by Michael Nash. He was doing a leadership course with the park service and part of the leadership course was to come up with something that would get community involvement and build pride in our community. He's a runner, so he approached rec center's board of directors about a marathon. So in 2008, we threw one together in three months. I think we were approached in August and had to kind of whip it up. We had a really, really successful event for a three-month planning period. We had 56 runners. It was really awesome. We had a lot of community involvement."

In 2009, organizers tried to hold another marathon, but had to cancel the event due to permitting issues. Permits are in place for the 2010 marathon and planning for the event has been in full swing since April. A total of 220 runners have already signed on for the event. Cost to register is $90 for the full marathon and $70 for the half marathon. The marathon's elevation is roughly 7,000 feet.

"We are capping out at 300 runners. That's what park service gave us as a parameter," Bazan said. "We are doing a half marathon this year, which we are really excited about. Right now we are at the stage where we have all of our permits done. We have the support of the Forest Service, park service, ADOT (Arizona Department of Transportation, and the community of Tusayan. Right now we just need both financial support from the community as well as volunteers. We need a lot of volunteers to make it successful."

The marathon, she added, is termed a "sustainable course."

"Which means we are not handing out water cups. There's no packaging. People will have to bring their own water bottles, so people will sit at a table and fill up runner's water bottles, as well as they would have some sort of minor blister care, first aid and things like that," Bazan said. "For the rec center it's the only fundraiser that we have."

Besides a number of details, organizers are currently seeking donations for finish line prizes. Food donations, financial support and more are sought for the event as well. Donations are tax-deductable, Bazan said.

"We like to kind of make (prizes) unique to the area, because it is a unique event. It is one of the most unique courses anyone will ever run. You're running half of the race directly on the Canyon and the half marathon is all run on the Canyon rim, which is phenomenal," Bazan said. "We like our grand prizes and our prizes to reflect who we are as a unique community. This is going to be a swell event."

More information about the marathon can be found online at www.grandcanyonmarathon.com. Runners for the marathon come from California, the east coast, Canada and other far-off locales. Medals, finisher pins, t-shirts and more will be offered to those who compete in the marathon.

According to co-race director Jeanie Sharp, the event will need a little over 100 volunteers.

The marathon is a non-for-profit event, Sharp added. A three-hour, 20 minute time limit has been set for the half marathon. There is no time limit for the full marathon.

"Everybody who works on it is a volunteer and all the funds go to the Grand Canyon Community Recreation Center. We support a student athletic scholarship and then other funds go to the rec center as necessary, so it's 100 percent non-profit," Sharp said.

An orientation meeting will be held in Tusayan the night before the marathon, hosted by the IMAX Theater. Finish tents will also be located there as well, Sharp said.

"The Grand Hotel is sponsoring an after-party, which we are real excited about," Sharp said. "They've booked a band, they will have cocktails, raffles. We trying to get the runners to stay here, make it a weekend, go see the Canyon, enjoy the community a little bit. It's a slow time for us. We have the courses set. We got the diagrams on the website. We know where the aid stations will be, how many people we will need, we've got to have two finish lines this year, we have a communications coordinator that sets up with the volunteer amateur radio club, so we've got radios all over the course keeping track of people. Xanterra graciously offered their transportation manager and buses to transport people from Tusayan to the race starts and stops. We've met with them and he knows what he needs to do."