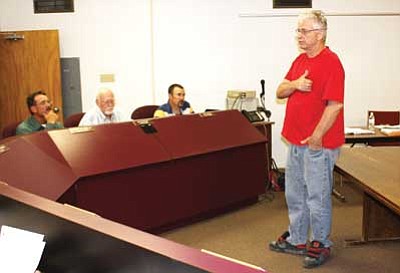 WILLIAMS - City council members approved an expenditure limitation of $19,306,500 for the Williams city budget during their most recent meeting July 8 at the offices of city hall. As part of a truth in taxation hearing held during the meeting, in which the public was invited to participate, Finance Director and Interim City Manager Joe Duffy explained that the city would collect more in property tax this fiscal year than they did last year, but that will not necessarily be the case next fiscal year.

"We are anticipating next year that the assessed value, I think it will probably go down next year," Duffy said.

There were no questions from the public on the matter during the July 8 meeting. Council members adopted Resolution No. 1257 adopting the 2010, 2011 fiscal budget. Council members also approved Resolution No. 1258, which approved the expenditure limitation of $19,306,500.00. Bernie Hiemenz was not present for the July 8 meeting.

Council members also agreed to move forward on an intergovernmental agreement (IGA) with Coconino County in which the city would operate Cataract Lake County Park to make it available once again to the public.

"There's two sets of restrooms there," Duffy said. "Probably the only way we could do it as a day-use park is to have a camp host."

The host would close the facility, clean and perform other duties, Duffy said.

"It's finding the right individual to actually do it," he added. "The county has told me that they are not firm with this. I am just looking for general direction."

Council member Don Dent said he believed locals would use the facility if it were used as a day-use facility.

"There are ramadas there where people can have birthday parties and things like that," Dent said.

Council members approved an historical marker for the city of Williams during their regular meeting July 8, following a presentation by Tom Garland with the E Clampus Vitus, Lost Dutchman Chapter, historical group. The group will place an 18-inch by 24-inch plaque near the picnic, drive through area of Glassburn Park at a cost of roughly $2,000. A dedication ceremony is planned for Sept. 25 at 10:30 a.m. Garland is the current president of the Lost Dutchman Chapter.

"This is what we do is go out and do something nice for the community," Garland said.

The plaque is expected to be in place Sept. 25.

"It's just another thing to draw a little attention," Moore said. "It's pretty much a no-brainer as far as I'm concerned."

Council members also talked about legal firms to represent the city of Williams. After a short discussion, members voted to approve the law firm of Magnum, Wall, Stoops and Warden as the new city attorney for the city of Williams. The law firm charges $150 an hour according to city officials. The city of Cottonwood used the firm for 30 years, according to Duffy. Colorado City officials were also impressed with the firm, Duffy said. The firm may also get an office in Williams City Hall. They currently have an office in Flagstaff as well. Magnum, Wall, Stoops and Warden were chosen out of five firms interviewed for the position. Current city attorney Lat Celmins will help in the transition.

"He has done a lot for the city over the years," Moore said.

Moore also talked about political signs currently on display throughout the Williams community when it comes to the current justice of the peace election. He asked council members to consider an ordinance that would control political signs in the future.

"I've had many, many complaints about political signs," Moore said. "We can just be thinking about, maybe down the road looking at some kind of ordinance."

Complaints have included the size of the size as well as their gaudiness, according to Moore.