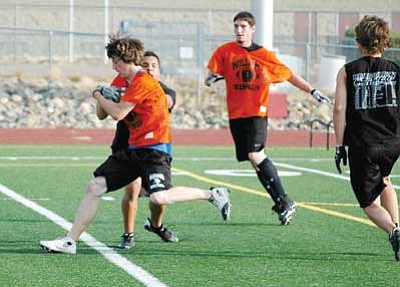 WILLIAMS - The Williams High School (WHS) Vikings plan to hit the ground running when the 2010 season begins. Participation in two passing leagues over the summer all but ensures that skills have remained sharp.

"We are so much further ahead in our passing game than where we were last year," he said. "It's incredible."

Teams play three games per night. The Vikes play the last three games of the nine game league this Thursday.

"We have never been involved in a passing league, never did one last year," Brownlee said. "I think the year before they might have had a little one down in Ash Fork."

Offensive teams include the Center and Quarterback positions along with backs and receivers. The defensive team excludes defensive tackles and defensive ends.

"It's all just specialty stuff," Brownlee said. "It's just awesome that we get a chance to work on our defense and offensive skill positions. It's great for your team to do their offensive routes. Not only that, we also have to play defense."

Along with the Bradshaw League, the Vikes also participated in the Sedona Seven-On-Seven Tournament held June 26.

Out of 10 teams, including 4A Coconino High School from Flagstaff, Mingus and Chino Valley, the Vikings were the smallest team competing, managing to place third overall.

"Valley Christian was there and in the first round of the tournament they stuck it to us," Brownlee said. "I don't even want to talk about the score but they beat us bad. But we actually beat them 40-25 later in the tournament."

The Vikes lost to Monument Valley 20-26 in their first match-up but went on to beat Sedona 50-0 in their second game. After winning against Mingus JV the Vikes were seeded second in the tourney based on points.

The Vikes faced Chino Valley in the semi-finals losing 20-26.

"Chino Valley went on to play Mingus in the championship game and only lost by two so that tells you our kids are very competitive and we were right in there," Brownlee said. "We did well. Super. I just can't explain how excited I am and how much further along we are than where we were last year."

Brownlee said the Vikings weight training program has been a success throughout the summer further prepping the team for the upcoming season.

"We've got some good ball players that are coming out of the junior high to high school but we really have this new senior class and the players are just all so much more positive," he said. "They are going to play hard and it's going to be a very fun year with these players. And not only that, they're talented players and they have the desire to go out and win every night."

Returning and new players will need to complete their required physicals as soon as possible. A Viking parents meeting will be held July 28 at 6 p.m. in the Williams High School Culinary Arts room. Equipment will be issued to players the following day with two a day practices beginning Aug. 2. Without a current physical, players will not be allowed to suit up and take the field.

To mark the beginning of this year's season, the Vikings will run through town at 9 a.m. Aug. 2.

"We're going to run east through town and circle back through town up to the field," Brownlee said. "That is going to be like our opening kick off day so that everybody sees that football has started. So come on out and cheer us on."

Camp Toro - Football Camp of Champions, sponsored by Mesa Mountain View High School, began Monday and will run through July 24 at Williams High School. In past years the camp has been held in other locations but due to field renovations organizers approached WHS officials about holding the camp in Williams.

"Basically, this is a neat opportunity for our kids because they get to go to this camp for free. This camp usually costs I think about $80-90 for each kid that signs up," Brownlee said.

The first week of the camp is designed for football players in grades 8-10. The second week is aimed at varsity players.

Brownlee said Viking players will participate in the second week of training and will be totally immersed in the game of football.

"When you have a camp like this they think and play football non-stop," he said. "This camp will start at 5:30 in the morning and it runs until probably about 9 p.m. It is a full day of football. Not necessarily focused on teams and offense but on fundamentals and skills."

With so many opportunities to practice basic skills throughout the summer, Brownlee said he and his coaching staff are looking forward to the start of the season.

"My expectations are high for the upcoming year," he said. "We're putting a new offense in and changing our defense up a little bit. We're really excited about it and so are the kids. We are going to hit this year running instead of walking like last year."