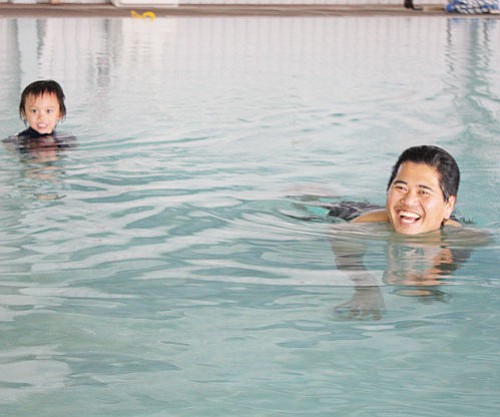 <br>Patrick Whitehurst/WGCN<br> Williams resident Mike Dulay swims with his son Michael, 3, at the Williams Aquatic Center. The pool will close Saturday, following a free swim planned at the facility.

WILLIAMS - A new round of budget cuts for the city of Williams has spelled the end of the Williams Aquatic Center. City officials said they will close the pool Saturday, eyeing a possible re-opening date in the spring of 2011, should the city's weakened tax base show signs of improvement by then. The decision to close the pool came after a special work session Jan. 19 in which Williams City Council members voted to adopt the cuts. Saturday's last day will be a free swim, according to city officials. The pool is scheduled to be drained Sunday.

Two full time city employees were also laid off following the special budget meeting: the city planner and a front office clerk. The pool's closure also means the loss of part-time employment for a number of city lifeguards employed at the pool. The pool's two administrators, Anna Curry and Sherry Sleeper, will remain employees of the Williams Recreation Department, according to Interim City Manager Joe Duffy.

"We decided to close the pool this year, and will look at reopening it in the spring of 2011," Duffy said in an e-mail interview Jan. 21. "The full-time employees are going to be moved to recreation to allow us to increase the programs for the kids at the Rec Center and Skate Park. They will also be assisting us at city hall."

According to Duffy, sales tax receipts have plummeted 18 percent for the city compared to figures from last year - a total of about $277,000.

"If the trend continues we project a shortage of $614,000," Duffy said. "Thus, we have no choice but to reduce services. Council re-enforced that we have already cut each department significantly over the last two years, and we cannot cut the departments like water, sanitation, police and fire, any further without risking the health and safety of our community."

Other reductions may be around the corner, city officials said, including further cuts in recreation and to Elephant Rocks Golf Course.

"We're reviewing their budget, talking with the manager and we're reducing their part time help this summer," Duffy said.

Williams resident Mike Dulay said he brings his son to the pool about three times a week. He expressed his irritation with the city's decision to close the facility. Dulay moved to the Williams community about two years ago.

"It really does suck. I think that taking away public facilities isn't a good thing for the city," Dulay said. "It's advertised as one of the attractions of the city and you're shutting it down. When we were looking at moving here, it said there was an ice rink here and we've never seen one, so what's left? There's really not much."