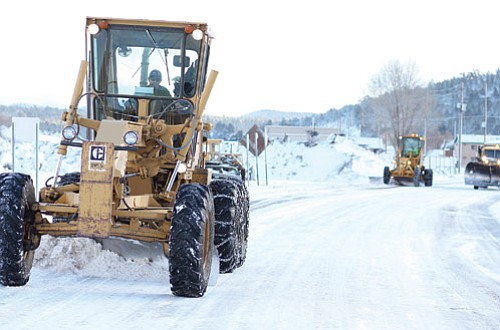 <br>Ryan Williams/WGCN<br> A snow plow moves snow off the road the morning of Jan. 19, following the first of three expected storms that began Jan. 18. Up to three inches of snow fell between Jan. 18-19, which caused schools in the Williams district to close Jan. 19.

WILLIAMS - Cars remained parked on both residential and business routes following the first of three expected snowstorms Jan. 19. City parking areas, designated for residents to stay off the roads, sat largely empty, though city crews did plow the lot outside of the Williams-Forest Service Visitor Center following the Jan. 18 snowfall. The lot opposite the visitor center, on the corner of Railroad Avenue and Grand Canyon Boulevard, remained unplowed as of 8 a.m. Jan. 19. All residents in the area were asked to park off the street during the week, due to the threat of snowstorms moving over the area, in an effort to facilitate faster snow removal. The city's parking lots were offered as parking for residents who could find no other accommodations.

Williams Police Chief Herman Nixon cautioned residents to be prepared should the storms produce as much snow as anticipated.

Nixon added that elderly drivers, as well as others who might need assistance in parking, should contact the police department.

"I truly believe that it's possible for that to work," Nixon said.

Two to three inches of new snow fell over Williams Jan. 18-19, though sunshine appeared over the city by 8 a.m. Jan. 19. Weather officials originally predicted eight to 10 inches of snow for Monday night's storm. The threat of snowstorms caused schools in the Williams area to close Jan. 19, following a four-day weekend for students in the district. Further snow is expected through Saturday, according to the National Weather Service.

Nixon said a bigger storm is expected to arrive tonight, though weather reports continue to be updated on an hour-to-hour basis.

"The big storm is coming in Wednesday night with lots of precipitation," he said. "That's going to run through Friday night and we're looking at possibly one to two inches of rain in the beginning and then probably a good 12-18 inches of snow."