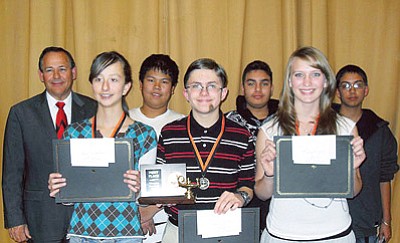 On Jan. 12, the eighth grade honor students competed in the first Williams Elementary-Middle School Knowledge Bowl in the school's auditorium.

Six students competed in the oral, second round of the Knowledge Bowl that evening. The contestants answered a broad range of questions relating to U.S. history, geography, government and constitution. John Lechtenberger, middle school social studies teacher, moderated the program.

There were three students who received Honorable Mention at the end of the competition - Julio Belmontes, Shean Ponce and Noel Calderon.

Third place went to April Zicopoulos, who received the bronze medal and a $15 prize. Chenell MacRae took the silver medal and a $20 prize.

Jeff Ellico was the Knowledge Bowl Champion. He received the championship trophy, the gold medal and a $25 cash prize.

Events, such as the Knowledge Bowl, emphasize the importance that the staff places on academic excellence at WEMS. This increased attention to academic performance reflects the expressed goal of the school to move from the state's designation of a "performing school" to a "performing-plus school."

WEMS hopes to continue and expand the Knowledge Bowl in coming school years.