Crash closes I-40 for four hours 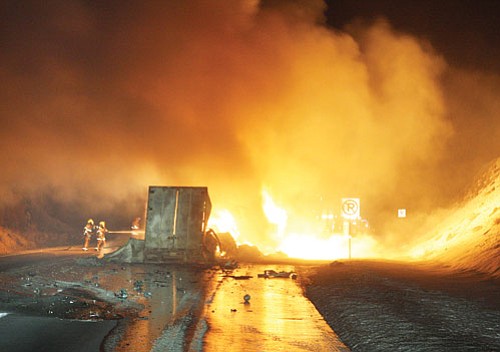 Williams - A two vehicle collision that involved commercial tractor-trailer rigs occurred Jan. 13 at approximately 2:57 a.m. on Interstate 40 eastbound, at milepost 155 about five miles west of Williams. Investigators believe the first commercial vehicle traveling eastbound up a hill at a speed that investigators believe was well below the posted 75 mph speed limit was rear-ended by a second truck traveling at a higher speed. The resulting impact ruptured the fuel tanks on the second tractor-trailer and ignited a fire, which consumed the second tractor-trailer as well as the trailer of the first vehicle. DPS says driver fatigue was the apparent factor in the fiery crash. The interstate was closed in both directions for more than four hours after the collision. The driver and co-driver of the first vehicle were not injured in the collision. The driver and co-driver of the second vehicle were both transported to Flagstaff Medical Center where they were treated for non-life threatening injuries. At 11 a.m., all lanes of I-40 were re-opened.