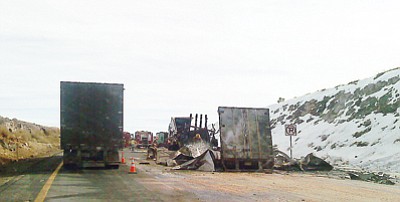 Photo/Sue Atkinson Travel was halted on Interstate 40 for more than four hours.

WILLIAMS - Arizona Department of Public Safety officers are investigating a two vehicle collision that involved commercial tractor-trailer rigs and occurred on today at approximately 2:57 a.m. on Interstate 40 eastbound, at milepost 155 about five miles west of Williams.

The first commercial vehicle was traveling eastbound up a hill at a speed that investigators believe was well below the posted 75 mph speed limit. This is common in the area due to the steep grade of the hill. The second commercial vehicle, owned by an unknown independent company, was also eastbound coming up the hill behind the first truck. Investigators believe this second vehicle was traveling at a significantly higher speed and rear-ended the first truck.

Hazardous Materials Technicians from DPS and the Flagstaff Fire Department responded to the scene. At that point, I-40 was closed in both directions. At 7:19 a.m. I-40 was reopened to westbound traffic after the fire had been extinguished and experts on scene determined the hazardous materials did not pose a threat to air quality.