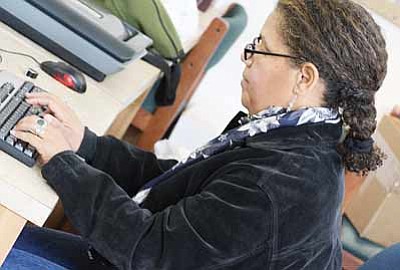 WILLIAMS - Williams has a rich historical legacy, much of it preserved in old photos that over time have begun to deteriorate.

Realizing that history is literally fading away, Andrea Dunn, librarian at the Williams Public Library, and U.S. Forest Service Archaeologist Margaret Hangan have joined forces to preserve as many historic photos as possible, both in the Williams Library collection and Forest Service archives as well as those of area families.

"Andrea and I together realized that many of the old families here in Williams have an amazing amount of photos," Hangan said. "Family photos and historic photos of Williams."

The two set out to work together to archive the photos digitally before the prints are lost as well as to take advantage of a unique opportunity to learn more about the history of Williams.

Dunn and Hangan began the project in September hoping families would bring in their old photos to be scanned. Hangan said she initially thought the project would only last several weeks.

"At first I thought I'd come down a couple of Saturdays," Hangan said. "We put out flyers hoping people would bring their photos in. Well, not too many people brought their photos in but we did start to scan in the library's collection and I quickly realized we had a lot more photos than just a few months worth at the library itself." She went on to say that the collection of images at the Williams library includes photos from the late 1800's and early 1900's, many of which are already breaking down.

Hangan said word is just starting to get out that the library is offering the scanning and archiving service and as a result a few personal photo collections have been dropped off in the last couple of weeks.

Personal or family photo collections stay in the library in a secure location while the scanning takes place. Once the pictures are scanned, Hangan said the photos will be returned along with a CD of the digital pictures. The digital copies will also remain at the library and in the Forest Service's archives.

A catalog system has been created to keep track of all the images that are digitally archived. The Forest Service is also currently in the process of scanning historic photos in their collection. Those images will then also be made available at the Williams library.

Historical Archaeologists examine both physical and documentary records in order to understand everyday life in past societies.

"The reality of it is there is a lot of our society that is not written down," Hangan said. "And our histories, the life of women, the life of children, the life of people of color, often times is not indicated in the history books at all. That is where Historic Archaeology comes in. It tells a much broader picture of the past because we can mix material goods along with the written word and the photos and maps. It shows a broader picture."

Hangan and Dunn are not only interested in archiving photos, but also maps, yearbooks or other historic items. Photos of surrounding areas such as Parks, Tusayan and Ash Fork are also of interest.

Dunn stressed the importance of the archiving project, emphasizing that access to much of Williams' oral history will soon be gone.

"Williams is losing a lot of its history because a lot of our old timers are passing on," she said. "We just need to archive some of this stuff before its gone forever."

For more information about the archiving project call Dunn at the Williams Public Library at (928) 635-2263. To read more about Historical Archeology visit the Society for Historical Archaeology's website: www.sha.org.