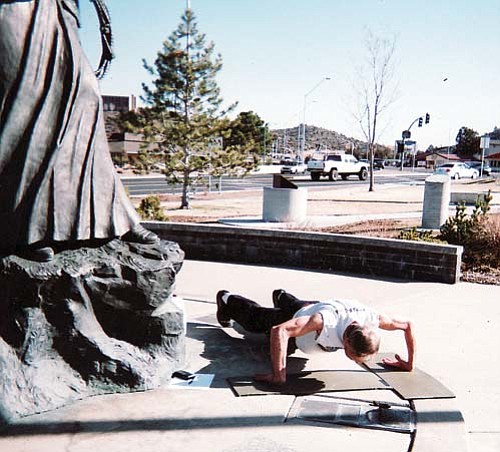 Those at the South Rim may remember Bill Kathan - the man who walked the Grand Canyon backward in 2008. His trip made headlines in northern Arizona and made the history books. Two years later, Kathan is at it again, this time with pushups. He broke the world record for the most backhanded pushups in one hour on Valentine's Day. While he made the record in Prescott, Kathan said the Canyon was his first choice for the undertaking.

He said he had a number of witnesses on hand to view the record-breaking event. Kathan, 57, chose to break the record in front of the Early Settler's sculpture in downtown Prescott at the corner of Gurley and Sheldon.

"People were blowing their horns. It was tough. I skinned my knee. I didn't have much padding because I was right on the pavilion itself," Kathan said. "Every time I brought my knee back I'd skin it on the cement."

Kathan said he makes the attempts at world records in order to share a message of companionship, a message he particularly likes to share with youth.

"I visit kids in schools," he said. "I talk to children about getting along with one another, not teasing one another, but to little each other up in their skills and the different things they do. It's not in the schools I meet the kids, but on the streets in Prescott. I lived in Prescott now for over two years."

What's next for the record-breaker? Just like he did at the Grand Canyon, Kathan said he is considering a backwards-walking trek, this time across the United States.

"People are really excited about listening to all the world records I've broken and they want to know what I'm doing next. I am doing something next," Kathan said. "I have to 30 miles per day. I'd like to make it in 106 days, because a man from India ran across it backwards in 107 days, so I'd like to do it in 106 days. If that doesn't work out, I want to go to Las Vegas, on Fremont Street, and do pushups for a year. That's on the back of the hands, pushups like I just did for the one hour, and I'd do 2,500 to 3,000 a day at a dollar a pushup. All this money that I raise, even going backwards, is for my youth development foundation for kids. I want to get a ranch for kids right here in Arizona. I believe kids would be a lot more behaved if they got out and did a little exercise and got out in the country in the fresh air and visit animals."

Kathan is originally from Vermont. He's also worked on a farm himself. In fact, Kathan said it was during his 25 years spent working on a farm that he first heard of world records. His Web site can be found online at www.mrwildbill.com.

"I heard someone doing jumping jacks on TV and I said, 'I think I could break that record,'" Kathan said. "He was on Good Morning America. He did 5,103 and I broke that record with 5,671 in one hour. I have records, not only in walking backwards and doing pushups, but also in crunches, leg lifts, jumping jacks, pull-ups with two fingers."

Kathan makes his way to the Grand Canyon at least twice a year, where he trains for his various endeavors.

"I trained at the Grand Canyon. I got ready for walking it backwards from the North Kaibab coming off the Bright Angel. It took me 15 hours, but I got across there," Kathan said. "I had a college student from Yavapai College help me get across. It was really tough, but I made. I was the first one to do it in history. Nobody else has done it in the world."