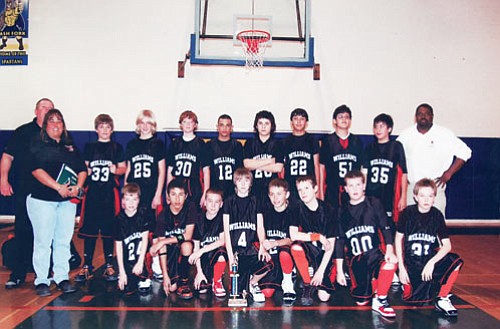 WILLIAMS - The Williams Elementary-Middle School Falcon A and B teams ended their season on a high note, winning the I-40 Tournament Saturday Feb. 13

The tournament began Feb. 12. The Falcons B team traveled to Ash Fork, the host of the B team I-40 tournament. Williams first took on Maine Consolidated coming away with a 36-6 win.

Damon Alvarado lead the way for the Falcons finishing with 10 points followed by Austin Kennelly, Edgar Duran and Ryan Smiley who all scored four points each.

Williams then took on Ash Fork in the championship game, again winning, with a final score of 26-14.

Leo Lopez put a team high 10 points on the board followed by Andrew Karlsberger and Smiley with 4 points each.

The Williams A team played in their tournament at Williams High School. The A team took on San Francisco de Asis in the first round finishing with a convincing 47-32 win.

The Falcon A team went on to play Grand Canyon Middle School in the championship game, winning 48-28. Davalos lead the Falcs with 20 points and Kohl Nixon shot for 16 points.

Coach Herman Nixon said that all the coaches, including Denise Brock and Melvin Berry, are proud of what both Falcon teams accomplished during the season.

"Not only did the A team go undefeated this year but they also won their bracket in a very tough Kayenta tournament," Nixon said. "Next year the Falcons should be just as good with some very good players returning for next season. Leo Lopez, Damon Alvarado and Ryan Smiley are all seventh graders who were pulled up to the A team this year and gained good experience, which will help the team next year."