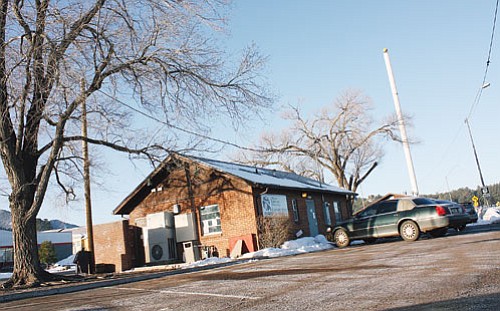 <br>Patrick Whitehurst/WGCN<br> Slated for closure this week, the Williams Motor Vehicle Division office will now remain open while a private company prepares to take over for the cash-strapped state of Arizona.

WILLIAMS - Originally expected to close as part of the state of Arizona's $100 million budgetary shortfall, the Williams Motor Vehicles Division may not close after all, thanks to a private firm that hopes to take over the operation in the coming weeks. Ken Foote with Footework Auto License and Title Service visited with member of Williams City Council to seek an agreement that would allow his private company to begin operations within the city. Foote would take over for the struggling state-run facility, which has been slated for closure as part of the state's budget cuts. Council members approved an agreement with Footework Auto License and Title Service during their regular meeting Feb. 11.

Williams Mayor John Moore said the intent is for the state to keep the MVD open until Footework Auto License and Title Service can move in, though the office may only remain open a couple days a week until the new management firm can take over.

"My thing with the MVD here is that we get a lot of people that come from the Grand Canyon, Ash Fork and Seligman. When they come to the MVD to buy their license or renew their license or whatever, they go and have a sandwich, buy some gasoline, or they may stop and do their banking here, or they do whatever it is they do here. That's the benefit of having the MVD in the city of Williams."

Foote said he hopes to keep staffing the same at the motor vehicles office.

"My goal is to get in there as quickly as possible, but there are things that are out of my control," Foote said. "There are a lot of things I'd like to do with the building, kind of clean it up."

"We try to get people in and out in 10 minutes. We try to be people-friendly and courteous and appreciate our customers. That's the kind of philosophy we'll carry over," Foote said. "We've been around for 13 years now. We have two offices currently. This will be number three. By the end of 2011 we'll have nine offices total. My goal is do to every single service that the state currently does."

Fees for the new center would also rise as the MVD makes the shift from state-run to private.

"We do have a convenience fee," Foote said. "That is above and beyond the motor vehicle fees. The pricing structure is pretty fair. It would be the same pricing that I would have in my other offices."

Convenience fees would run a little over $20 on top of regular motor vehicle fees, Foote said.

"We do look for ways of communicating some of the things that are available to people that the state may not want to talk about," Foote said.

The Williams MVD office was originally slated for closure this week. Other offices slated for closure include the MVD in St. John's, Clifton and Wilcox. Twelve offices were earmarked for closure in Arizona in total. Other Department of Transportation cuts include the closure of 13 rest areas and a reduction in construction and maintenance efforts statewide, according to ADOT officials. Over 100 MVD employees have been laid off as part of the cuts.