Group hopes to save pool
Second meeting set for tonight 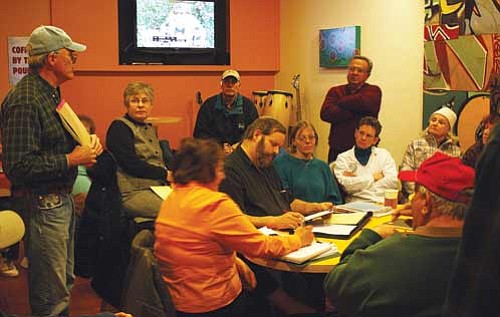 <br>Patrick Whitehurst/WGCN<br> Friends of the Williams Aquatic Center meet at American Flyer to plan a fundraising effort to re-open the pool by May.

WILLIAMS - Plans are in the works to reopen the Williams Aquatic Center in late May, but only if $70,000 can be raised in time to get the doors open. According to members of the Friends of the Williams Aquatic Center, a new group formed to save the pool, response from staff with the city of Williams has been positive. The group met with city representatives Feb. 6, including City Finance Director Joe Duffy and Councilmember Bill Miller, to work out a number of ideas to keep the facility from closing permanently.

The Friends of the Williams Aquatic Center held an organizational meeting Feb. 2, following city council's decision to close the pool as part of a number of budget cuts. Council members voted to close the pool during a special work session Jan. 19. The decision spurred a small protest at the regular meeting of Williams City Council Jan. 28. Over 60 people came out in support of the pool during the meeting.

The group plans to meet again tonight at American Flyer, located on Route 66 in the downtown area. The meeting begins at 6:30 p.m. and is open to all.

Currently, the center has closed and is in the process of being winterized, though the water remains in the pool in the hopes that it can be easily reopened later in the year by the Friends of the Williams Aquatic Center.

Lisa Williams, a former employee of the pool, has been helping to spearhead the group's efforts.

Members of the group meanwhile, said they hope to meet with Carol Glassburn, chairperson for the Williams Needs an Angel Committee to hammer out ideas that may help save the cut facility.

"We'll see if we can't do some fundraising through that," Williams said. "We had a few things thrown around like maybe we can do a golf tournament here soon."

Should the pool reopen, fees for the use of the facility would likely increase, she added. The pool would remain open only through the remainder of the summer if enough income is generated to get the doors open, but it is likely not going to remain open year round.

"We're going to have sponsorships, too. Bearizona has said they would sponsor the pool, which I think is awesome. If we could get a few more people to do that, I think it would be great," Williams said.

A Web site for the group can be found online at

www.saveourpool.com. There are roughly 20 members of the group. Donations, support and inquiries can be made through the Web site, Williams said. A little over 20 attended the group's first meeting Feb. 2.

"That was amazing," Williams said. "I didn't think we'd get that many people to show up. We have had wonderful support everywhere we go. We are going to try and raise that $70,000. I think we can do it."