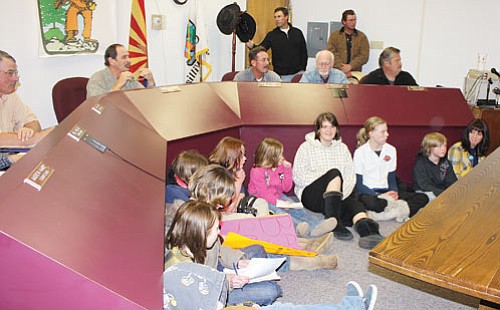 WILLIAMS - Roughly 60 people filled the Williams City Council chambers Jan. 28 to protest the recent closure of the city pool during the council's regularly scheduled meeting. While the matter of the Williams Aquatic Center's recent closure was not on the agenda, a number of individuals expressed their unhappiness about the resolution during the call to the public portion of the meeting.

Swimmers of all ages sat on the floor and filled every seat in the council chambers, some carrying signs asking city officials to keep the pool open and to not drain the pool should it remain closed. City employees were scheduled to drain the pool Jan. 31, though that decision has since been postponed. Council members opted to close the pool, as part of a new round of budget cuts, during a special work session Jan. 19.

As part of their efforts, a number of residents, as well as former lifeguards, passed around a petition last week seeking signatures from those in support of the pool. Nearly 800 signatures were collected in all, according to organizers - part of a proposed group called "Friends of the Williams Aquatic Center." Copies of the petition were given to city officials to keep on file. The group also met for their first meeting Feb. 2.

Mayor John Moore cited a number of recent cuts when it comes to the city's floundering budget.

"We sat here in this council for the last several months laboring over what we were going to do to make our ends meet," Moore said. "We had to lay people off. We cut other areas. We're going to be at the point where we have to look pretty seriously at how we're going to continue to function at the level we got."

City Finance Director, and interim City Manager, Joe Duffy told those at the meeting that sales tax revenue had been dropping for two years.

"Two years ago we started reducing our budget," Duffy said. "We went through our departments, department by department. We started trimming little pieces of fat off here and there and we made it through the last fiscal year. The last fiscal year we ended the year $500,000 in the hole more than we had planned. We actually had to use borrowed money to make payroll."

He said that, this fiscal year, the downward trend in revenue has continued - to a tune of about $300,000.

"We've laid off the equivalent of eight employees in two rounds," Duffy said. "We have reduced the level of services in all of our departments. There is no travel, there are no uniforms, we cut in every place we could. Our elected officials have taken these cuts very seriously and have worked very diligently trying to minimize the effect on our citizens."

Duffy said the council really had no choice but to close the pool. Costs to run the facility, he said, totaled around $70,000 annually for the lifeguards. The pool itself operates at roughly $20,000 a month during the peak times for the facility. At a minimum the pool costs about $18,000 a month, Duffy said.

"We're at the point where now we're either cutting public safety, or public services, cutting our water, our sanitation and these departments have already been cut," Duffy said. "At the end of this fiscal year, we may be out of cash. We may not be able to pay our bills and that's as simple as it gets. We've got to (keep) the things necessary to keep us afloat."

Area resident Molly Harris asked that council consider the formation of a pool committee that could help city staff look at other areas to cut other than the aquatic center.

"One instance would be the golf course. I went online and I compared our golf course fees to a lot of the other municipal golf courses across Arizona. Our fees are much lower than theirs," Harris said. "I don't think, in haste of closing the pool, without explaining to everybody the details involved in running a pool. To shut that pool down is going to cost you a lot more money to open it back up because of damage that's going to occur."

Williams resident Robert O'Neill told council members that "value could be expressed in more ways than just dollars." He said he was impressed by the fact that the Williams community seemed to place a lot of value on the youth of the community.

"If it becomes an empty facility next to the recreation center, who's going to be hanging out there? Our kids that didn't make it. They're going to be sitting on that porch in the dark, drinking and drugging, that's the future," O'Neill said, adding that he believed the facility would be better served as a health club facility.

"We need to review the costs connected with the aquatic center separately from other budget cuts that were voted on on Jan. 19," said area resident Sandy Arcari. "I propose an immediate halt to the closing of the pool Saturday, so that the community may have the opportunity to offer alternative options to funding the aquatic center pool and its programs. If need be, close the pool, but do not drain it until a community study can be completed. I am asking to hold off draining the pool until March 25, so that the community may come together, due diligence on this matter, and provide an alternative funding method. With a Friends of the Williams Aquatic Center funding program in place, commitments from individuals and sponsorships from both individuals and businesses can encourage vibrant, active community members and contribute to an attractive and inviting Williams."