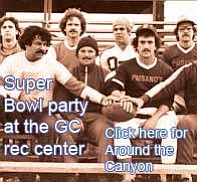 The big game is upon us and organizers at the Grand Canyon Recreation Center are planning a party in honor of the event.

The rec center will host a Super Bowl part this Sunday beginning around 5 p.m. The big game will be offered on a big screen and complimentary pizza and wings will be served while supplies last. For more information, contact the rec center at (928) 638-3389.

Veterinarian Dr. Fred Bush of the Flagstaff Animal Hospital will be at the Grand Canyon Kennels Tuesday from 12:30-2 p.m. Dr. Bush has provided veterinary care to residents of Grand Canyon for nearly 30 years. Call (928) 779-4565 for more information.

November 2009 South Rim artist-in-residence Randy Erwin will present an evening program performance on Feb. 24 at 7 p.m. at Shrine of the Ages. During his autumn residency, Erwin charmed school kids, locals and park visitors alike with his cowboy yodeling, original and classic songs from the Old West, and his fancy rope tricks. Please plan on attending this all-ages, fun and interactive repeat performance.

Members of the Grand Canyon chapter of Alcoholics Anonymous meet three times weekly at the South Rim. The group meets Mondays. Wednesdays and Fridays in the Kachina Room of Kachina Lodge. Meetings for the group, which has been in existence at the Grand Canyon for 15 years, begin at 7 p.m.

The Grand Canyon Recreation Center will screen Ken Burns "The National Parks: America's Best Idea" throughout January and February. Refreshments will be provided for each screening. Each episode will begin at 6:30 p.m. Episode four will be held tonight. Episode five will be held Feb. 10 and the final episode will screen Feb. 17.

The Grand Canyon Rec Center offers a number of great activities for residents of the Grand Canyon and Tusayan, including Yoga classes and more. Tuesday night flow classes are offered from 5:45-7 p.m. and cost anywhere from $10 for a drop in class to $50 for an eight class package. Beginning Yoga with Jennifer is offered Wednesdays from 5:45-7 p.m. A night class is offered for donations on Sundays beginning at 5 p.m. A kids' Yoga workshop is offered on select Fridays. Contact the rec center for more details.

Movies at the GC Rec Center