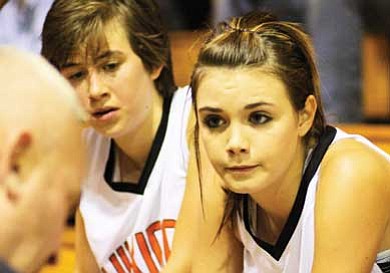 WILLIAMS - After the Williams Holiday Tourney, the Lady Vikings held a 5-1 record but in the following weeks the girls squad hasn't fared as well, losing eight straight games.

The downward slide began Dec. 7 against Camp Verde at home.

Head Coach Phillip Echeverria said Camp Verde is one of the better teams playing in the 2A Division.

"It has kind of been our deal, we're having a quarter, if not two quarters, where we score two to six points and we're not going to come out with too many victories doing that," Echeverria said.

First quarter woes continued against Sedona in an away game Dec. 10 with the Lady Vikes down 11-2 heading into the second quarter. The Lady Vikings went on to outscore Sedona in the remaining quarters but still lost by one point, 37-36.

"We kind of lost the game in the first quarter," Echeverria said.

Echeverria said Alma Hernandez is consistently scoring in the double digits but that his other players are struggling.

"We need some other players to step up and score as well," he said. "We're probably shooting as a team about 20-25 percent. We're missing a lot of easy shots."

The following day, the Lady Vikings took on Chino Valley away. Scoring only three points in the second quarter and seven in the third, the girls again lost by one point, 35-34.

After the holiday break, the Lady Vikings take on Wickenburg Jan. 4 in an away game.