Development possible on Purdy property
Exploratory road work currently under way, rezoning request to go before Planning and Zoning in 2011 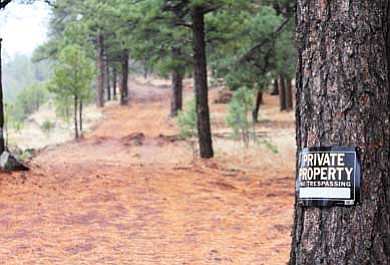 WILLIAMS - After the purchase of 70 acres of property southeast of Williams, Forrest Purdy has begun exploratory work at the east end of Williams for a possible new development.

According to Williams Building Inspector Tim Pettit, Purdy is currently rejuvenating roads on the property and completing pre-engineering work to determine the best way to engineer new egress and access.

The land, known as Canyon Vista, was originally platted in 1958. Pettit said the roads are city dedicated. The property is currently high density zoned at 7,000 square foot lot minimums. Purdy hopes to rezone the property to a lower density use with two or three acre minimums.

"There are a lot of lots in the old design that would never have worked anyway because of the topography on it," Pettit said.

Pete Baldwin, Purdy's broker and land developer with Platinum Realty Network, said the concept would be to merge both properties into a low-density subdivision similar to Pine Meadows.

"Should this property be developed by the Purdy's, the community of Williams will benefit greatly by bringing new commercial business and lower density, private and aesthetically pleasing residential lots," Baldwin said.

According to Pettit, the rezoning request will likely go before the Planning and Zoning Commission in late March or April of next year.

Pettit said Purdy also plans to request a rezoning of 8-10 acres of the property near Mountainside Inn to commercial use.

Any development on the property will likely be years down the road.

"Purdy sees the future and he knows that nothing is going to happen in the next five years or more," Pettit said. "Only people with money and time could do this and Forrest has both. The broker on board is driving it more than anything because he gets paid that way."