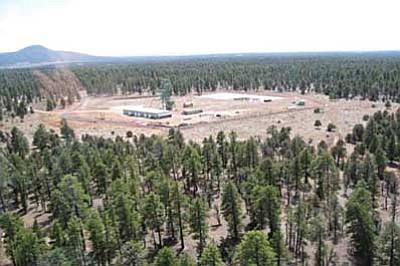 Denison operates the Arizona 1 Mine located on the Kanab Plateau in Mohave County, Arizona, approximately 35 miles southwest of Fredonia on 19.4 acres of BLM land. The mine has a production rate of 109,500 tons per year of uranium ore and was originally developed in 1988 with initial work conducted in the late 1980s and early 1990s.

The Arizona Department of Environmental Quality (ADEQ) is currently considering applications by Denison for Class II Air Quality permits for the Pinenut and EZ mines, both located on the Kanab Plateau approximately 30 miles southwest of Fredonia, and the Canyon Mine, located on the Coconino Plateau about six miles southeast of Tusayan. Denison is also seeking a water quality General Aquifer Protection Permit (APP) for the EZ Mine.

According to information provided by the ADEQ, the decision by the Secretary of the Interior to suspend new uranium claims near the Grand Canyon does not include the existing claims of the Arizona 1, EZ, Pinenut and Canyon mines.

Alicyn Gitlin with the Grand Canyon Chapter of the Sierra Club said the ADEQ is not regulating Denison's mining operations adequately, proposing to permit the EZ Mine with a general aquifer-protection permit that includes far fewer requirements than an individual permit.

"Given the potential threat to the groundwater and ultimately the seeps and springs of Grand Canyon, it is outrageous that the ADEQ is not requiring the most stringent protections," she said.

Jackie Banks, Public Affairs Officer with the Kaibab National Forest, said an Environmental Impact Statement (EIS) for the Canyon Mine was prepared during the 1980s although the mine never became operational due to falling uranium prices. She said as of last week, Denison Mines had not approached Kaibab National Forest about reopening it.

"If Denison Mines seeks to reopen the site, additional environmental analysis may be required due to the age of the existing EIS, any significant new circumstances or information relevant to environmental concerns, or any operational changes proposed by Denison Mines," she said.

Banks went on to say that while there is generally not an expiration date attached to an EIS, those more than 5 years- old are usually reexamined.

"Also, if there are any significant new circumstances or information relevant to environmental concerns, or any operational changes proposed by Denison Mines, the EIS would need to be reexamined or supplemented to bring it up to date," Banks said.

"There were a lot of good questions that came from primarily the environmental groups," he said.

Official public hearings will be held Jan. 4 in Fredonia and Jan. 6 in Flagstaff. Shaffer said, to date, Denison has been in compliance with ADEQ requests.

"From our experience thus far it seems to be off to a good start in that regard," he said. "Of course, there is going to be a lot of data to analyze as we get more into the process."