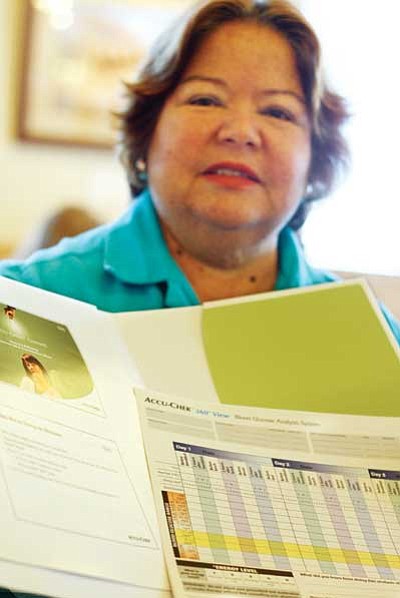 WILLIAMS - Being diagnosed with diabetes doesn't have to ruin your life. Just ask Rose Marie Rincon.

Rincon provided primary care for her mother who eventually died of the disease. Rincon herself was diagnosed with diabetes shortly after her mother's death. She said she always considered herself a fairly healthy person.

"It was a shock," she said. "Even though it was in my family and my mother had it and I was her caregiver at the very end, I never thought I was going to get it. It was kind of like a slap in the face."

After a long period of losing sleep at night and feeling tired and thirsty, Rincon went to her doctor to find out what was wrong.

"I just felt lousy," she said. "I felt like I was coming down with the flu to tell you the truth."

Upon her diagnosis with diabetes, Rincon began to educate herself about the disease. She became interested in diabetes prevention as well as aspects of controlling the chronic condition.

Rincon and her husband Larry founded the Williams Diabetes Support Group (WDSG) about 12 years ago to promote Diabetes awareness and how to better take care of one's self.

Eventually, a Flagstaff support group was founded and currently has around 50 members with the Williams group numbering between 15-20 people per meeting.

"Once you get into how to do it, it is not as hard as people would think," she said.

The support group is a place to share experiences with diabetes and overcoming the disease. Rincon said those recently diagnosed find the group a big help.

"You know, they're just in shock and they don't know what to do and how to even get started," she said. "When they come, they love the fact that we have the materials there to help them and they get a better understanding of where to start."

According to Rincon, diabetes keeps growing and America is getting heavier.

"We're not getting ahead of it," he said. "Changing behaviors is the hardest part. We're human beings. Especially when it comes to food. A lot of it comes down to attitude. It takes an emotional and physical toll on people. If you don't take control of your emotions it works against you because you don't take care of yourself. Changing attitudes. Changing habits. This is what it comes down to."