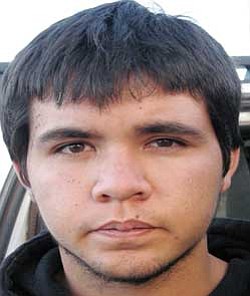 YCSO received information that Niedermeyer was in the Williams area Aug. 25. Deputies located a vehicle associated with Niedermeyer, who was reported as armed with several firearms. Deputies, along with members of the Williams Police Department and an Arizona Game and Fish Officer, established surveillance on the vehicle at a hotel room in Williams registered to Niedermeyer's girlfriend, Krystle Holden, 24. Both Niedermeyer and Holden were observed leaving the hotel room together.

Deputies later made contact with both subjects walking on Route 66 near Monument Park. Holden attempted to prevent the arrest of Niedermeyer by jumping in front of deputies.

Niedermeyer is now in the custody of the YCSO for the issued arrest warrant. Holden was booked in the Coconino County Detention Facility for resisting arrest, endangerment, and obstructing government operation on a "no bond" for the felony charges pending an initial appearance.

Several firearms were found in Niedermeyer's vehicle following his arrest.